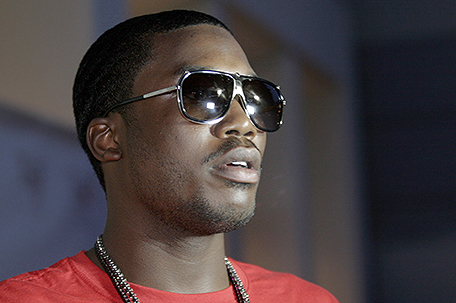 Rapper Meek Mill’s drug and gun convictions should be thrown out and he should be granted a new trial, prosecutors said in court Monday in an announcement that led his supporters outside to break into an impromptu dance party.

Judge Genece Brinkley refused to free him on bail Monday after the announcement from the Philadelphia District Attorney’s office during a hearing. She scheduled another hearing in June.

Philadelphia-born Mill was sentenced in November to two to four years in prison for violating probation on a roughly decade-old gun and drug case. Attorney Brian McMonagle said they would reach out to a higher court to get their client released.

“The district attorney’s office has shown a lot of integrity in granting our request for a new trial,” McMonagle said. “They obviously have recognized and determined the criminal behavior of the arresting officer, which dates back prior to Meek’s arrest.”

A police spokesman said the department had no comment on the arresting officer allegations.

Meek Mill’s mother, grandmother and 6-year-old son, Papi, were on hand at the rally outside the courthouse, which erupted into cheers after the district attorney’s announcement.

“I miss my dad very much,” Papi said. “He picks me up from school.”

Brinkley has been the subject of harsh criticism from Mill’s attorneys. They have unsuccessfully appealed the sentence multiple times and have called for Brinkley to recuse herself.

The judge defended herself earlier this month, saying the court has “has impartially and without prejudice presided over numerous proceedings in this matter since 2008.”

She added that “none of the allegations by (the) defendant constitute evidence that this court is unable to act impartially and without personal bias or prejudice with respect to this matter.”