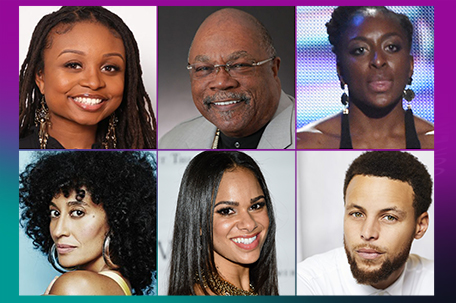 The awards was presented during the 52nd NAACP Image Awards Virtual Experience, presented by Wells Fargo from March 22 – 27.

The week-long virtual experience, streamed at: naacpimageawards.net, invited fans to join the Image Awards in a celebration of “Black Excellence,” including a virtual red carpet, curated conversation series, a theatre featuring past performances and speeches and an after-party celebration following the LIVE show aired on BET and simulcast across ViacomCBS Networks including CBS, BET Her, VH1, MTV, MTV2, and LOGO on Saturday, March 27, 2021 at 8/7c.

The NAACP Jackie Robinson Sports Award was presented to both Stephen Curry and The WNBA Players Association for their high achievements in athletics in addition to their contributions in the pursuit of social justice, civil rights and community involvement. Previous recipients include Michael Jordan, Jim Brown, The Harlem Globetrotters, Jackie Joyner-Kersee, Sugar Ray Leonard, and Eddie Robinson, among others.

Over his 11-year career in the NBA with the Golden State Warriors, Curry has become one of the most influential stars both on and off the basketball court. He has won three NBA championships, two MVP awards, and holds seven NBA all-star selections. Off the court, he is a youth advocate, recently launching the Eat. Learn. Play. Foundation with his wife Ayesha Curry, which seeks to unlock the potential of every child by providing them with the fundamental resources they need to thrive in life.

In addition, he collaborated with Under Armour to launch Curry Brand, a purpose-led performance brand with a mission to ensure every young person has equitable access to sports. The award will be presented to Curry by Stacey Abrams during the virtual awards show Friday, March 26.

Created in 1998, The Women’s National Basketball Players Association (WNBPA) is the first labor union for professional women athletes. Over the years, the WNBPA has additionally been at the forefront of helping players advocate for social justice.

Most recently, the WNBA is working to launch a new platform called The Justice Movement, which amplifies the voices and leadership of WNBA players, and is creating a social justice council whose mission is to be a driving force of necessary and continuing conversations about race, voting rights, LGBTQ+ advocacy, and gun control, among other important societal issues. The award was presented by Jemele Hill and accepted on WNBPA’s behalf by WNBPA President Nneka Ogwumike, during the virtual awards show on March 25.

Ballet dancer Misty Copeland received the prestigious Spingarn Medal, which is presented annually in recognition of the highest or noblest achievement by a living African American during the preceding year or years. Copeland made history by becoming the first African American female principal dancer with the prestigious American Ballet Theatre. Throughout her career, she has worked with many charitable organizations and is dedicated to giving of her time to work with and mentor young girls and boys. In 2014, former President Obama appointed Copeland to the President’s Council on Fitness, Sports, and Nutrition. Previous recipients of this award include: Mrs. Daisy Bates (mentor to the Little Rock Nine), Rev. Jesse L. Jackson, Myrlie Evers-Williams, Earl G. Graves Sr., Oprah Winfrey, Cicely Tyson, Harry Belafonte, and Sidney Poitier. The Spingarn Medal was presented to Copeland by Susan Fales Hill during the virtual awards show on Tuesday, March 23.

In a year that was marked by a surging movement of activism and activists of all ages using their voices to create change, the NAACP will recognize Rev. Dr. Wendell Anthony with “Activist of the Year”award and Madison Potts with the “Youth Activist of the Year” award. Anthony — who is the president of the NAACP’s Detroit branch — will be recognized for his tireless work over the past year helping community members combat the COVID-19 crisis, protect their voting rights, and fight for social justice.

Madison Potts was recognized for her exemplary work in Georgia as an organizer with voter education and registration in the primary election, general election, and 2020 Georgia  Senate runoff election.

•  The “Our Stories, Our Culture” program, including “A Conversation With…” presented by Ford Motor Company, which which saluted essential workers, as well as a web series called “Fashion Pull-Up,” hosted by celebrity wardrobe stylists GooGoo Atkins and Apuje Kalu, which explored the most notable fashion moments from the NAACP Image Awards’ red carpet over the years.

•  The NAACP Theatre, showcased past Image Awards’ performances and speeches. Additionally, all content that aired during the virtual experience throughout the week was made available on demand the next day in the theatre.

•  A virtual photo booth and selfie station, where fans could take a photo with their personal device and post to their social media platforms.

•  A post-gala afterparty immediately followed the live broadcast on BET, which featured classic cuts by DJ Questlove, current cuts by DJ Kiss, and a Jazz Lounge performance by Robert Glasper and Lalah Hathaway.