Cuba Gooding, Sr., star of The Main Ingredient, dies at 72 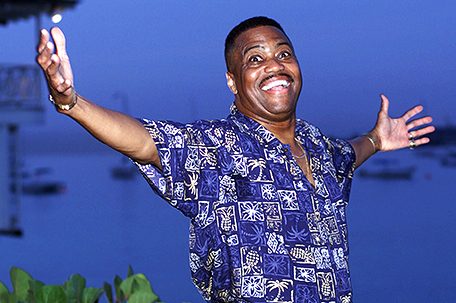 Cuba Gooding, Sr. — the soul-singing frontman of the 1970s band The Main Ingredient and the father of actor Cuba Gooding, Jr. — died last Thursday at age 72 in the Woodland Hills area of Los Angeles.

With Gooding as the band’s lead singer, The Main Ingredient scored its biggest single with 1972’s “Everybody Plays The Fool,” which hit both the R&B and pop charts. In 1978, Gooding left the band to pursue a solo career and signed to Motown Records, where he made two albums.

In a 2014 interview on Intersection, a program from NPR Member Station WFME, Gooding reminisced to host Matthew Peddie about his early career. “I was born in a little town called the village of Harlem, New York City. And being born in Harlem had its advantages if you wanted to be an entertainer because it was literally, as I was coming up, with the Cotton Club and Carnegie Hall and everything else in New York City, the entertainment capital of the world … My mom and dad were determined that their first-born son would do something in the arts, if I had the talent.”

Gooding began his professional career in 1964, but his big boost came several years later when he joined the soul trio The Main Ingredient. Formerly led by singer Donald McPherson, the group was first called The Poets, then The Insiders, and finally (beginning in 1966) The Main Ingredient. However, after McPherson’s untimely death from leukemia in 1971, the group called upon Gooding, whom they knew from the neighborhood, to become its new lead singer. He had already provided background vocals for the group and toured with them during McPherson’s illness.

Along with the success of “Everybody Plays The Fool” and other songs like 1974’s “Just Don’t Want To Be Lonely,” the Gooding era of The Main Ingredient saw collaborations with Stevie Wonder and Leon Ware. After departing the successful trio, Gooding went on to make two solo albums for Motown; the first was titled The 1st Cuba Gooding Album. However, he wound up returning to the trio’s fold in 1980, and the band made two more albums for RCA Victor.

Interest in The Main Ingredient waxed again after singer Aaron Neville covered “Everybody Plays The Fool” in 1991, and Gooding released one more solo album, “Meant To Be In Love,” in 1993.

Cuba Gooding, Jr–Show Me The Butler!