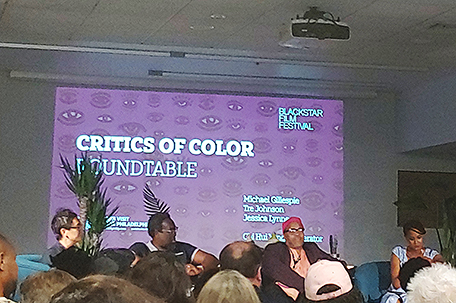 The 8th Annual Black Star Film Festival kicked off the week with their first panel, The Critics of Color Roundtable on August 1 at The Institute of Contemporary Art. The sold-out panel was moderated by educator Chi-hui Yang, and featured Michael Gillespie, Tre Johnson, Jessica Lynne, and Greg Tate.

The Critics of Color Roundtable panel covered topics ranging from context of writing, about what is catching the attention of the critics, and what they believe is important.

While discussing the context of writing, art critic Lynne and Philadelphia-based writer Johnson spoke about the differences in their writing style.

“I think as someone who primarily writes about visual arts, I knew I wanted to be and think alongside women,” said Lynne.

“As a Black male that comes from trauma and poverty, I bring all of that to my writing,” Johnson said.

The writers also spoke about what they find interesting and what is important to them as writers.

Tate, who focuses on African American culture, says he notices that many people are fascinated with Black writing.

“Black thought has become an object of fascination,” he said.

Gillespie believes it’s important to connect with other creative individuals in the industry.

“What’s been important for me is to reach out to filmmakers,” he said. “Because of my position, I can have a little more access to reach out.”

Attendees also stated why they decided to come out to this discussion featuring the diverse set of panelists.

Debora Kodish, who has attended the festivals for the past seven years, says she was interested in hearing what the panelists had to say.

“I love Black Star,” she said. “I think it creates this liberated space. I’m interested in how people talk about their work.”

The festival even brought attendees from out of state.

Clairesa Clay, a New York native, says this festival is informative and many people aren’t aware of the projects discussed.

“As a programmer, I was interested in hearing Michael’s take on critiquing,” she said. “One of the films he mentioned is one of my favorite films. “Chameleon Street” is the movie. The festival brings light to films the Black culture doesn’t know about.”

Yang says the mission behind Black Star Film Festival is to create an open dialogue with Black art.

“The mission is to create a critical conversation around Black art. It focuses on artists in the city.”

To find out more information about the Black Star Film Festival or to attend the next festival, visit: blackstarfest.org.