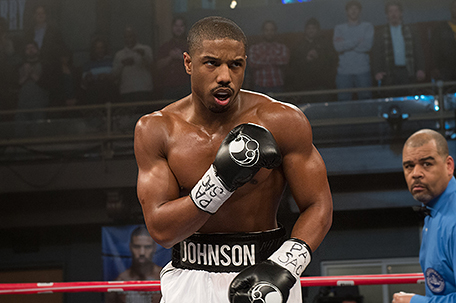 ABOVE PHOTO:  Michael B. Jordan in Creed.

Michael Bakari Jordan is considered one of Hollywood’s brightest young actors. He garnered critical acclaim for his sterling portrayal of Oscar Grant in Ryan Coogler’s Fruitvale Station, a searing account of a slaying by police officers on a San Francisco train platform.

Produced by Forest Whitaker and co-starring Octavia Spencer and Melonie Diaz, the film premiered to rave reviews at the Sundance Film Festival where it won both the Grand Jury Prize and the Audience Award. And at Cannes, it was named Best First Film.

Michael’s additional film credits include Fantastic Four, That Awkward Moment, Blackout and Pastor Brown. On TV, Michael enjoyed recurring roles on two of the most popular dramas of the past decade. First, he played the hard-shelled, softhearted Wallace on The Wire. He then went on to star as quarterback Vince Howard on the Emmy-winning series, Friday Night Lights.

Hailing from Newark, New Jersey, Michael made the most of an opportunity to begin acting professionally at an early age. After being spotted by a talent scout, he was cast in a recurring role on the CBS sitcom, Cosby. Soon thereafter, he appeared on The Sopranos, and was selected the following year to play Jamal in the sports dramedy, Hardball.

Here, he talks about reuniting with Coogler to collaborate on Creed, the seventh installment in the Rocky series starring Sylvester Stallone. He handles the title role as Adonis Creed, son of Apollo Creed, Rocky Balboa’s ring foe in Rocky 1 and 2.

Kam Williams: Hi Michael, it’s nice to speak to again, and right on the heels of Fantastic Four.

KW: All is well. How about you?

KW: I loved Creed. What a brilliant way to reboot the franchise: introducing you while paying homage to Rocky.

KW: Did you two start thinking about Creed soon after shooting Fruitvale Station?

MBJ: No, we actually started talking about this film before we started on Fruitvale. Before we even went to set, Ryan pitched me on the idea. He asked me if this would be something I’d like to do. I was like, “Yeah, sure.” Then we got the word. honestly, the time it took to go from conception to pre-production went by really, really fast. And we were very excited to get back on set and do something special, something that meant a lot to Ryan.

KW: It’s impressive that Ryan managed to get permission to make this spinoff of a classic series, especially since it’s only his second movie, and his first was a low-budget art flick.

MBJ: Yeah, Ryan grew so much from Fruitvale.

KW: How do you explain your actor-director chemistry that works so well in both pictures?

MBJ: I really value the actor-director relationship, and we have a shorthand, a way of communicating on the set that makes things very comfortable. and we push each other to be better.

KW: Editor/Legist Patricia Turnier asks: Did you feel any responsibility playing the son of such an iconic character?

MBJ: I really didn’t feel any pressure in this process because I was fortunate enough to be working with the creator of Rocky. Sly assured me that I didn’t have to worry about competing with anything. He told me that I wasn’t Rocky. He’d say, “You’re Creed, and I’m here to support you.” When you have the man himself reminding you of that day-in and day-out, there is no pressure, and that freed me to focus on just doing the work.

KW: Patricia says: I really liked your performance in Fruitvale Station and I consider you a young Denzel Washington.Is it important to you to pick your projects in order to to have a positive influence on the world?

MBJ: Yes, 110 percent! You can’t just grasp at straws, once you achieve a certain stature in your career. I’ve been super selective since Fruitvale. You have to make smart choices to have a progressive career. You have to pick projects that you really care about.

KW: Did you ever imagine that the Black Lives Matter movement would become as big as it has when you were making Fruitvale Station?

MBJ: Oscar Grant wasn’t the first, and he won’t be the last. It’s always been happening, but the fact that everybody has a camera phone means that these stories are being seen now. Everything’s exposed, but there’s still a lot of work to be done. From a creative and impact standpoint, Ryan and I really tried to get people to think about how we all treat one another, regardless of skin color. But it’s a problem that unarmed black men are dying in the streets, and that film definitely tried to speak out to that fact.

KW: When I interviewed Stallone, I was surprised at how humble and down-to-earth he is.

MBJ: For sure. The guy is incredible. He’s been doing this for over 40 years, and he’s really a solid, respectable guy.

KW: How did you prepare for the role? Did you train and talk to boxers?

MBJ: I had the element of time on my side, because I knew about the project so early on. I changed my diet a little. I started to get into shape. And, about a year out, I went hardcore, completely stripping down my diet and working out several times a day, boxing and weightlifting. I wanted to be treated like a fighter. I didn’t want any special treatment. I wanted to be surrounded by the best boxing minds available to us, so I could soak up as much information as possible. I trained and sparred with Andre Ward, Amir Khan, Gabe Rosado and Tony Bellew… We had all professional fighters in our film. I believe that helped me a lot, because they were quick to point out anything that was inauthentic. So, we had a great environment to do a boxing project the right way.

KW: Did you speak to Carl Weathers, who originated the role of Apollo Creed?

MBJ: I didn’t get a chance to talk to Carl about the project, though we did speak a little bit, because he supports one of my projects, Lupus L.A. We talked about Creed briefly, but nothing too deep.

MBJ: I remember my sister tricking me into getting into a dryer. [LOL] Thank goodness, she didn’t turn it on. She’ll probably kill me for sharing that story, but that’s definitely one of my earliest childhood memories.

MBJ: I’m the same person at home, except I may be a little more aware of the eyes that are on me when I’m on the carpet, and of their expectations. I’ve gradually come to realize that you have to have your game face on when you step onto the red carpet.

MBJ: My favorite movie monster? [Pauses] let me think… That’s a great question. I don’t know. Let me circle back to that one.

MBJ: [LOL] Not really. I never think about the questions that nobody’s asking me.

MBJ: It taught me what people are capable of, and it definitely affected me for a period of time in terms of making myself vulnerable. And it made me more aware that what looks great on the surface might not be okay on the inside.

MBJ: Yeah, I still want to shoot a movie in my hometown, Newark, New Jersey.

KW: Thanks again for the time, Michael and best of luck with Creed.