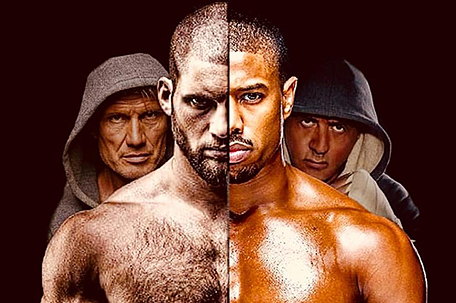 The 2015 spin-off to the “Rocky” film series “Creed”, directed by Ryan Coogler, introduced the world to Adonis “Donnie” Johnson (Michael B. Johnson). Adonis, the illegitimate son of legendary boxing champion Apollo Creed, seeks a tangible connection to the legacy of his father who died before he was born. The path to reconnecting leads Adonis to search for Rocky Balboa (Sylvester Stallone), his father’s former and currently retired trainer.

Through the process of training and becoming a professional boxer, we see a tremendous amount of growth in Adonis both professionally and personally. He falls in love with upcoming singer/songwriter Bianca Porter (Tessa Thompson), he faces the feelings of rejection that have plagued him since childhood, he develops a bond and ever evolving relationship with Rocky and truly becomes secure in who he is as a man and a fighter.

“Creed II” begins with Adonis in a secure place in his life. He currently holds the title of heavyweight champion, his relationship with Bianca is blossoming and he seemingly has settled into who he is at this stage of his manhood. Old wounds are reopened when Ivan Drago (Dolph Lundgren), the man who killed his father Apollo, resurfaces. Adonis quickly begins to unravel when Drago’s son Viktor Drago (Florian Munteanu), a man who lives to breathe hate and revenge, challenges him for the title. The audience is sent through a myriad of emotions witnessing the internal battle of Adonis, trying to avenge a father who was stolen from him during the fight against Drago more than 30 years ago.

At this brand new stage in Adonis’ life, he is an engaged man with a baby on the way. Adonis, who has always craved family, is on the brink of starting his own. The timing couldn’t be worse, as he wrestles with making a decision that could have dire consequences on the people that are counting on him the most. The match between Adonis and Viktor is potentially a matter of life and death.

The question on everyone’s mind is… will history repeat itself? Rocky, still riddled with guilt for not stopping the fight that killed Apollo, attempts to right his wrongs by pleading with Donnie not to take the fight. The pressure for Adonis to emerge from living in his father’s shadow, while simultaneously trying to avenge him is complicated further when Adonis’ relationship with Rocky is tested.

What the reason is and what is truly important are two of the themes weaved carefully throughout “Creed II”. All of the characters have an inner conflict of some sort, that forces them to examine what drives them and why. We see painful memories resurface, we see the characters battle with being willing to accept their shortcomings, and we see the characters fight to become the best versions of themselves.

In addition to the emotional rollercoaster this film offers the viewers, there is an increased intensity in the fight scenes that are guaranteed to have people on the edge of their seats.

“Creed II” is not just a boxing film, it’s not just a sequel… it is truly a story about growth that will take audiences on a journey through one of the most challenges aspects of life… change. “Creed II” opens in theaters on Thanksgiving Eve, November 21. This film is an absolute must see! Check your local listings for show times.