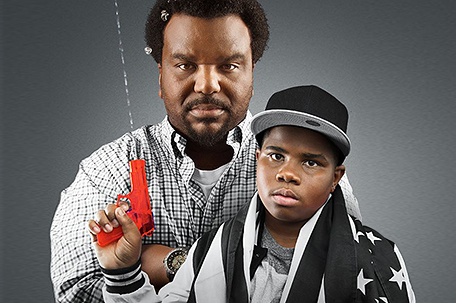 ABOVE PHOTO: Craig Robinson stars as Curtis and newcomer Markees Christmas as his son Morris in the new comedy/drama, “Morris from America.”

Beginning as a stand-up comedian, Craig Robinson first made his mark on the comedy circuit at the 1998 Montreal “Just for Laughs” Festival. Now headlining venues and festivals across the country, he does both solo acts as well as full-band sets with his band, “The Nasty Delicious.”

Before deciding to pursue his comedy career full time, Robinson was a K-8 teacher in the Chicago Public School System. He earned his undergraduate degree from Illinois State and his Masters of Education from St. Xavier University.

It was while studying education that he also discovered a love of acting and comedy when he joined the famed Second City Theatre. Craig is perhaps best known for his portrayal of Darryl Philban on the TV series “The Office,” but he’s also starred in such movies as Knocked Up, This Is the End, Hot Tub Time Machine, Hot Tub Time Machine 2 and Sausage Party, as well as his very own TV sitcom, “Mr. Robinson.”

Here, Robinson talks about his latest film, Morris from America.

Kam Williams: Hi Craig, thanks for another opportunity to chat with you. How’re you doing?

Craig Robinson: I’m good, Kam, how about yourself?

KW: I’m doing fine, thanks. I really enjoyed Morris from America, which represents a bit of a departure for you, being a dramatic role. What interested you in the project?

KW: I think that chemistry between Curtis and Morris was critical to the success of the film. How long did you get to know and to practice with Markees Christmas prior to shooting?

CR: We only got to meet once to say hello to each other before he flew over to Germany. He was already there about three or four weeks before I arrived. We had one rehearsal the night I arrived, and then we were shooting the next day. Yeah, that’s about how much time we had, but we still had very good chemistry.

KW: Yeah. Your characters feel a little isolated as newcomers to Germany. Did you feel alienated there in real-life also?

CR: [Chuckles] No, when I’m traveling, I tend to keep my mind open, because I’m on the lookout for what I’m going to learn about myself. So, I didn’t feel isolated or alienated. We had a good time, and we were in Heidelberg and Berlin, two completely different places. Heidelberg is quaint and sweet, while Berlin is just sexy.

KW: I’ve heard that Berlin is very cosmopolitan and that most people speak English there.

CR: Yes, it’s very easy to get around in Berlin. And they have Uber.

KW: Did you perform any of the songs on the Morris from America soundtrack?

CR: I don’t know if it made the soundtrack, but that was me doing Biggie’s “It Was All a Dream” in the scene in the bedroom with the girl.

KW: Did you have any hesitation about signing on to do a film set in Germany that was being directed by Chad Hartigan, a guy born in Cyprus and raised in the U.S.

CR: No, I really, really liked the script and the the main characters’ relationship. I felt like it was something I could sink my teeth into. I also liked the challenge of making an indie movie which I felt could expand my horizons. It was all very exciting to me, including doing it in Germany. And remember, Chad was taking a chance on me, as well. I’m grateful to director David Gordon Green [Pineapple Express] for highly recommending me.

KW: Did you ever study German?

CR: In the third grade, I had a German music teacher who taught us a few German folk songs like “O Tannenbaum.” No, I never really studied German. For this film, I learned to speak my dialogue phonetically.

KW: I think you did a great job.

KW: Besides you and Markees, I also think Lina Keller was great as his love interest.

CR: Yeah, she killed it! She really stands out because you kinda don’t where she’s coming from, but she feels genuine. She played it perfectly. She’s something else! And Carla Juri was great, too.

KW: I also enjoyed Sausage Party, your other movie that’s currently in theaters. I interviewed Seth Rogen for that one. How does he manage to assemble such great ensemble casts for his pictures?

CR: Trust! He puts out quality movies. He’s fun to work with. and you know that you’re going to be allowed to improvise and be presented in your best light. If he calls, I’m like, “Let’s go! Yeah, let’s do it!”

KW: What would you say was the message of Sausage Party?

CR: I’d say it’s about everybody coming together for a common cause.

KW: And what would you say was the message of Morris from America?

CR: Being able to get through stuff and grow.

CR: You want me to just admit that for the public?

KW: Yeah, then I could tweet it to the world.

CR: Getting into comedy, thinking I could actually be successful at it.

KW: Would you mind giving me a good generic question I could ask other celebrities?

CR: Sure, what’s the last thing you dreamt about?

KW: And thanks again for the time, Craig, and best of luck with both films.

Craig Robinson of Hot Tub Time Machine 2–Back with the boys, back in the tub, and backwards in time again

Morris Chestnut– Morris muses about life and his latest offering!