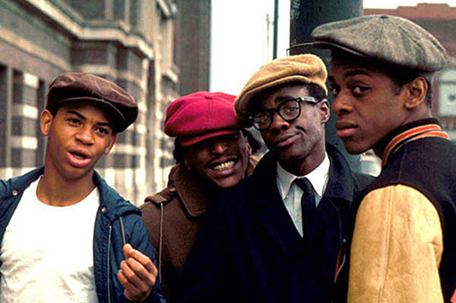 Director Michael Schultz’s 1975 American International film “Cooley High” is one of those films that seems to be on every “most beloved” black films list. The period dramedy set in 1964 Chicago, chronicles the lives of two high school best buddies, Preach (played by Glynn Truman), a serious minded guy with aspirations of becoming a famous writer, and his best friend Cochise (played by Lawrence-Hilton Jacobs), the school basketball hero who’s headed for college and what looks like a promising career. Together we follow them as they goof off, fall in love, cut class, crash parties, and other shenanigans that most teenagers get involved in, as they dream of how to leave their poverty-stricken neighborhood for greener pastures. The only thing that really stands in their way are two local thugs out for revenge after a stolen car joy ride goes wrong.

Made for only $750,000 (which went a long way 40 years ago) the film, written by Eric Monte, has wonderful period detail, and is a sweet, heartfelt, nostalgic film that is never overbearing or sentimental, but retains an urban grittiness which gives it a sense of believability.

Finally, last year, after decades, the film was finally remastered and looking better than ever before, when it was released on Blu-ray through Olive Films in April 2015.

Those who haven’t seen it should rent or buy a copy and watch it soon. It was announced today by Deadline, that a remake of “Cooley High” is in the works at MGM, with DeVon Franklin, Common and Tony Krantz teaming up to produce, and Seth Rosenfeld (“How to Make It in America,” “The Get Down”) penning the script.

Franklin will produce through his Franklin Entertainment, Common via his Freedom Road Productions and Krantz through Flame Ventures.

The trio say that the racial unrest being currently experienced in the USA makes the remake timely. No word on whether it’ll be set in the present-day, although that would be the most obvious thing to do.

It’s still early, so there are no story specifics, casting decisions, or ETA on the project yet.