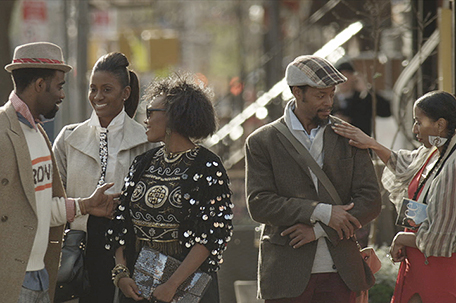 ABOVE PHOTO:  Scene from the film “In the Morning’

A packed crowd gathered at The African American Museum for their Friday night “Films at AAMP” series. The featured film was ‘In The Morning’. ‘In The Morning’ tells the story of a group of friends in Brooklyn. The story focuses on three women in their thirties; Zuri, Harper, and Cadence, at the culmination of life altering decisions. The film celebrates friendship while framing their quest for happiness, passion, and fulfillment. ‘In The Morning’ gives the audience a front row seat to a story about black love and life narrated by black people in a way that we don’t see often enough.  An eager crowd sat attentively waiting to hear from the mastermind behind this powerful film, director/writer Nefertite Nguvu.

The Q&A session with Nguvu began with a recap of her journey from the page to the big screen. As writer, producer, and director of ‘In The Morning’, Nguvu was no stranger to the struggles of being a female director of color. She conveyed the importance of films that tell our story. “I definitely don’t think that there are enough stories like this. I want films to reflect the people that I know. I want films to reflect my community and I think slowly but surely that’s happening. There are many more examples now, but it’s still not enough. That’s why I made In The Morning, and that’s why I will continue to make films to  showcase who we are… truly and deeply.” She added, “I certainly wanted to make a film about African-American life in the way that I know it. I wanted to make a film about our every day lives. I wanted to make a film about intimacy, vulnerability, and love… That’s what ‘In The Morning’ is.” 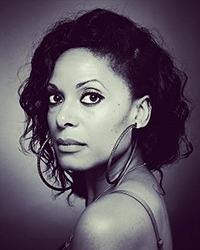 ‘In The Morning’ offers the audience a refreshing display of African American people sans stereotypes. The representation we see of women in this film follows the same pattern, they don’t fit neatly in a box. Nguvu detailed her goal for the women in this story. “I was inspired by Spike Lee’s film ‘She’s Gotta Have It’. I love Nola Darling… I still don’t think there’s anyone like her. Because of what exist, we feel the need to sort of construct these positive role models, but it feels like life is a lot more complex than that. I love Nola because she didn’t fit into anyone’s expectations, she was so in possession of her own self. I wanted to create a film with women like that.” She continued with, “I wanted three Nolas. I wanted three women who are on their own, living life according to their own rules. I wanted them to all have different paths and to be in this place of ownership.”

In addition to pushing past the social construct of what it means to be a woman, ‘In The Morning’ addresses some of the ideas surrounding adulthood. What does it actually mean to be an adult; is it solely working, paying bills and managing responsibility? If so where do passion and happiness come into the equation? Nguvu tackles these questions throughout the film.

“I was definitely cognizant of writing about people in their 30s. I feel like when you’re in your 20s, you feel like you have  a lot more options in terms of being able to live your life in the way that you want to live it. A lot of us by the time we get to our thirties… it gets real. You have all these other expectations you’re living up under and all these rules you have to abide by. I really wanted to write about people in their 30s that are navigating the space of other people’s expectations of what life is supposed to be… and still in the wake of that, trying to live life according to what makes them happy which is no easy feat.”

‘In The Morning’ is a must see film, necessary to help redirect the conversation both on and off screen about African Americans. ‘In The Morning’ will be released independently Spring 2017. Visit http://inthemorning-thefilm.com/ to stay informed and to support this dynamic film.