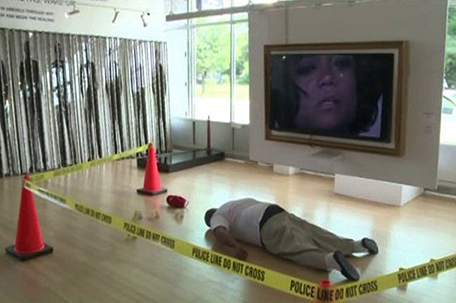 A controversial new art exhibit in Chicago highlighting Michael Brown is not getting high marks from the slain teen’s father.

In an interview with Fox 2 News, Michael Brown Sr. expressed his displeasure with the exhibit, which was created by controversial white artist Ti-Rock Moore.

In his eyes, Brown Sr. would like nothing more than for the exhibit to go away.

“I really, really would like for them to take that away,” he said. “I think it’s disturbing, disgusting … that picture is still in my head.”

“I have no problem with the person who created it, but I think they should have reached out to both sides of the family,” continued Brown Sr., who , noted that he and Michael’s mother should have been contacted.

Ti-Rock Moore’s exhibit, titled “Confronting Truths: Wake Up!” opened over the weekend at the Gallery Guichard in Chicago and features a life-sized Michael Brown lying face down after his death. In addition, the exhibit features a black Statue of Liberty and a noose dangling from a neon sign.

Michael Brown Sr. isn’t the only one who has a problem with the exhibit.

Kirsten West-Savali took her criticism of the controversial work to The Root.com. For West-Savali, the exhibit revictimizes Michael Brown. The following are West-Savali’s thoughts regarding the exhibit:

“I tend to reject safe art and embrace that which makes me step out of my comfort zone and feel something, so I have fought against my reaction to Moore’s piece. Some may read that as meaning that she has accomplished her mission but they would be wrong.

My reaction is to her having her white hands on Michael Brown’s black body when he’s not here to protect himself. It is eerily and unsurprisingly reminiscent of poet Kenneth Goldsmith having the audacity to read Michael Brown’s autopsy report and call it poetry.

State-sanctioned, anti-black killing is not art. Neither is murder, although legally I cannot call his death a murder.

And despite Moore’s assertions to the contrary, a working definition of white privilege is white artists believing they can claim artistic ownership of black death, while disowning their white guilt and being applauded for their “courageousness.”