Commentary: Basking In The Shade 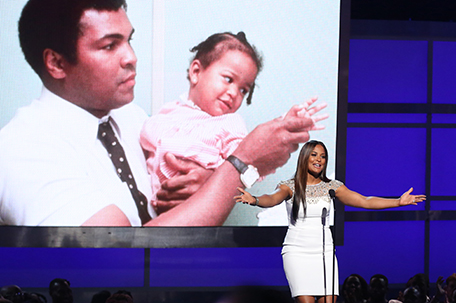 ABOVE PHOTO:  Laila Ali speaks during a tribute to her late father, Muhammad Ali, at the BET Awards at the Microsoft Theater on Sunday, June 26, 2016, in Los Angeles.

After taking to Twitter to condemn a Prince tribute at the Billboard Awards, ‘Blackworld’ had its eye on BET and Sunday night’s BET Awards.

That was the Tweet that the folks at BET sent out on May 22 during the Billboard Music Awards.

You see, Madonna, the Queen Of Not Staying In Her Lane, was designated by the Billboard Awards brain trust to give a musical tribute to Prince, whose death in April still has a lot of us off of our game.

While the two icons were buds, and I guess to the folks at Billboard it made some sort of sense, it did not go well. At all. What she did to “Nothing Compares 2U” should be illegal internationally. Not even Stevie Wonder, one of the few folks you can put in the same sentence as Prince without sounding silly, could save this mess.

So BET, reading the Black Twitter tealeaves, assured everyone that they’d do better by the Purple One at the BET Awards, which were held last Sunday. There was reason to be hopeful because Sheila E, Prince’s longtime friend and collaborator, and Philadelphia’s own Legendary Roots Crew were involved, but we’re still talking BET. I wasn’t expecting a whole lot. I figured that if they could keep Chris Brown out of the equation, it would be a win.

But for once, the BET Awards were kind of decent. Hosts Anthony Anderson and Tracee Ellis Ross from “Black-ish” kept the evening moving smoothly, although I’d like to have a serious discussion with the person who felt the need to put Anderson in ass-less pants.

Sure, there were acts featured that I couldn’t understand (Desiigner…spelled with two “I’s”) and some I had never heard of (Bryson Tiller, his ambulance and his grandpa sweater), but the show didn’t make me run from the room screaming for once.

Things started off, as they often do in Blackworld, with Beyonce’. She and Kendrick Lamar performed the song “Freedom”, from “Lemonade” and started the evening on a good note. Although, I do wonder how close Queen Bey came to punching Lamar in the face during rehearsals.

(Sorry kids. Still not a fan.)

And the part of the show that everyone is still talking about, (and I guess we’ll be talking about it until something happens to sate our relatively short attention spans), is the Humanitarian Award speech given by “Grey’s Anatomy” star, activist (and fellow Temple alum) Jesse Williams, a speech that singer Justin Timberlake will always remember for all the wrong reasons.

(Here’s a rule about Twitter: If you think that you’re about to Tweet something about an event like, say, the BET Awards, that you think might lead to your being dragged through the streets, step away from the I-Phone…)

The late Muhammad Ali got a moment in the sun when his daughter, Laila thanked everyone for their thoughts and prayers as she stood in front of a picture of her as a baby and  “The Greatest” sharing a moment. It was a pleasant surprise which is, again, not something you usually get at the BET Awards.

You even had some politics in the most unlikely places. If anyone had told me that Usher would be the one giving us a political message (Don’t Trump America t-shirt), I’d have asked you what you were drinking. But on a broadcast where “Get out and vote” was a prevailing message, it fit.

But let’s keep it real. The only reason folks watched this year’s BET Awards was to see if the network could live up to the shade it threw at the Billboard Music Awards.

Most folks think it did. I do. But my reasons might be different from yours.

For example, I liked Erykah Badu’s version of “The Ballad of Dorothy Parker” more than I liked Bilal’s “The Beautiful Ones”. I don’t know if that’s because “Dorothy Parker” is one of my favorite songs, period or because grown men rolling around on the floor doesn’t impress me, but that’s how I feel.

Jennifer Hudson’s version of “Purple Rain” was also good, if not a little loud. I made the mistake of re-watching the show on my laptop with headphones. I understand that you need to project on Broadway, but it was a bit much.

Also, I don’t care if I never hear “Nothing Compares 2U” from anyone other than Prince ever again. I really don’t. I love Maxwell. A lot. And he did a great job with it. But I’m just not feeling it.

But the last tribute of the night was the best. Sheila E., joined by Prince’s ex-wife Mayte Garcia and Jerome Benton of The Time, featured “Housequake”, “Let’s Work”, “A Love Bizarre” and other tunes that should have made the folks at Billboard who called Sheila E. “irrelevant” when planning their Prince tribute feel more than ashamed of themselves.

All in all, the BET Awards did what they were supposed to do. They lived up to their Tweet and showed that the network might be growing up.

Now if the network would just restart it’s news department.