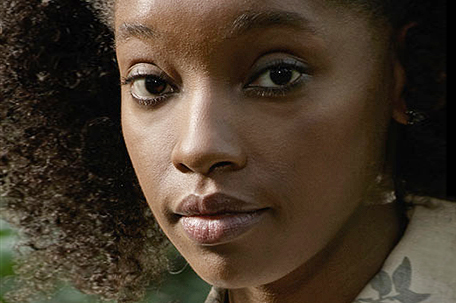 Every fall there’s an influx of new TV series. One notable standout is the WGN original drama, ‘Outsiders’. ‘Outsiders’ follows the lives of the Ferrells, a family that has 200 years of history rooted on Shay Mountain in Kentucky. The isolated life of the Ferrell clan is threatened as the mountain they call home becomes a target because of the coal mine it rests upon. But as the struggle ensues for control of the mountain, and their minimalist traditions, a love story emerges. Breakout star Christina Jackson gives an inside look at life on ‘Outsiders’.

Jackson, who had a recurring role on HBO’s ‘Boardwalk Empire’, stars as Sally-Ann, the African American love interest of Hasil Ferrell. Jackson beamed while speaking about the love connection between Hasil and Sally-Ann. “She’s grown up hearing about the Ferrells.” Jackson said.  “You would imagine all of the stories that she heard… They’re crazy, dirty, and they rob places. Hasil has only heard that the town people are crazy, mean and don’t like the Ferrells. So when Hasil comes in, there’s a change that happens. For these two people there’s a revelation.”
Jackson adds, “Hasil is so honest. He’s so focused on the positive, and so one track minded about being with Sally-Ann and making her happy. Hasil is doing everything right. How can you not like somebody like that? How could you not fall in love with someone like that?”
Sally-Ann is noticeably the only main character of color on ‘Outsiders’. The discussions surrounding the lack of diversity in Hollywood bring to mind the pressures of being the only one.

“Gone are the days where we have all black tv shows. When I was growing up, I could turn on my TV and see people who looked and talked like me. Slowly but surely we’ve kind of phased out of that and ended up with episodic shows that have one black character.” Jackson goes on to say, “What ends up happening is if you are one of the few people that ends up on a show, as part of an ensemble cast, you kind of feel this pressure that you’re carrying a representation for the whole race. Everything about your character has to be non-problematic and non-stereotypical.”
The pressures of representing blackness for an entire community is lessened only by the fact that Jackson is an actress lending her talent to the role of Sally-Ann. That fact is separate from the lack of diversity in the world of TV and film. Much like Jackson, Sally-Ann and Hasil’s love prevails despite what is happening around them. “They are just two people that like each other and are falling in love in the middle of a lot of stuff that has nothing to do with them.” Jackson remarked.
The first season of ‘Outsiders,’ is filled with mysticism, family drama, power struggles, and forbidden love… What could possibly happen next? Christina Jackson shared her hope for the audience after the first season. “I want people to be able to take away a good amount of conversation as a result of this show about; how we treat people who aren’t like us, race, and morality issues. I just hope this show will make people think.”
Be sure to tune into the ‘Outsiders’ on WGN Tuesdays at 9PM EST /8c to see what’s next for Sally-Ann and the Ferrells.