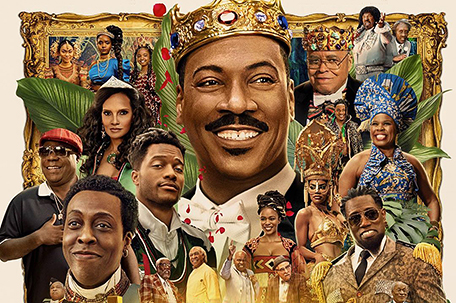 When I was growing up, there weren’t many images of Black royalty in media or film, despite their existence being so well documented. However, before there was Wakanda, there was the kingdom of Zamunda.

Outside of Eduard Charlemont’s “The Moorish Chief” painting hanging in the Philadelphia Museum of Art, the regal presence of King Jaffe Joffer and his kind-hearted son Prince Akeem was many Philadelphians’ introduction to Black royalty in the mainstream.

“Coming To America,” released in 1988, became an instant classic for its extravagance, humor, infamous one liners and the timeless story of love finding a way no matter the obstacles. In the film, Prince Akeem (Eddie Murphy) flees Zamunda and the marriage his parents King Jaffe Joffer (James Earl Jones) and Queen Aoleon (Madge Sinclair) have arranged for him on his 21st birthday. Prince Akeem and his trusty but trouble making best friend Semmi (Arsenio Hall) leave the beauty of Africa for America — by way of Queens — on a quest to find his true love. Akeem finds love in Lisa McDowell (Shari Headley), the daughter of Cleo McDowell (John Amos), a restaurant chain owner. Despite the initial disapproval of King Jaffe Joffer, Prince Akeem and Lisa defeat the odds against them and eventually return to Zamunda to live happily ever after.

King Jaffe Joffer has always been a stickler for tradition; and although Prince Akeem’s eldest daughter Princess Meeka is overqualified for the task of becoming the heir to the throne, misogyny and tradition deem that notion unacceptable. With old age and illness pressing, the King reveals, through the help of witch doctor Baba, (Hall), that Prince Akeem has a male heir in America. His male heir, Lavelle, is the result of a one-night stand with an American woman named Mary (Leslie Jones), an encounter fueled by Semmi’s shenanigans. Shortly thereafter, the King dies, making Prince Akeem the King of Zamunda.

With nothing more than a sketch of Lavelle in hand, now King Akeem and Semmi head back to Queens where it all began, in search of his long-lost son. King Akeem and Semmi meet Lavelle outside of a baseball stadium scouting tickets. After dropping the bombshell news and some convincing on behalf of the King and Semmi, Lavelle, Mary and Reem return to Zamunda.

In honor of King Jaffe Joffer’s dying wish, King Akeem begins the process of grooming Lavelle as the crowned Prince and his successor. Hijinks ensue as Lavelle struggles to find how he fits into this new world of propriety and expectations. Similar to his father, Lavelle finds himself in a pickle. In an attempt to maintain peace in Zamunda, King Akeem agrees to have Lavelle marry his enemy General Izzi’s daughter Bopoto. The betrothal to Bopoto Izzi, which Lavelle initially agrees to, comes to a halt when he realizes he has fallen in love with Mirembe, his royal groomer.

The match — which is also seen as inappropriate — sets Lavelle on the same path his father once took. In true full circle moment format, King Akeem has to be reminded of what it felt like to reject tradition and follow his heart.

Some themes remain prevalent throughout the film. On the forefront is understanding the value in tradition and the importance of knowing when to break away from it.

“Coming 2 America” is packed with laughs, nostalgia and the incredible character work that Murphy and Hall have been known for throughout their incredible careers. It has heart — the new cast members bring a fresh chemistry and flare, and the cameos are outstanding and unexpected. Many were leery of the sequel with fear that it would not hold up because the original is just that good.

Though the original still remains in a category all its own, the sequel “Coming 2 America” serves as a reminder of the special place this film franchise holds in Black culture. If laughter is indeed medicine, “Coming 2 America” is just what the doctor ordered.

“Coming 2 America” is available to stream on Amazon Prime on beginning, Friday, March 5.