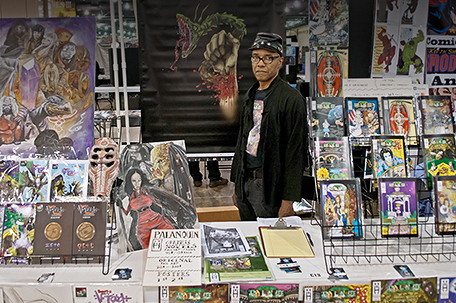 At Amalgam Comics, you can have coffee with your copy of “Black Panther.”

If you went to the panel “Superpower To The People!: Creating and Promoting Diverse Voices In Geek Culture,” chances are that you saw Ariell Johnson, the owner of Amalgam Comics & Coffeehouse on Frankford Avenue

Johnson was part of a group that included Len Webb, a member of the Philadelphia-based Black Tribbles podcasting group, and Claire Folkman and Kelly Phillips, creators of the comic anthology series Dirty Diamonds that talked about how this group of Black comic fans turned their geeky passions into careers.

As the owner of Amalgam Comics and Coffeehouse, Johnson is the first Black woman to own a comic book store on the East Coast. It’s a comfortable place where you can sit and read a good comic book while drinking a latte. There’s also a space for collectables, a children’s space complete with children’s comics, and even a place where you can play some board games with your friends.

She’s also proof that Storm from “The X-Men” can inspire great things.

After a visit to Amalgam Comics and Coffeehouse on Free Comic Books Day (where Yours Truly got a chance to reserve copies of the first two issues of the new “Black Panther”), the SUN sat down with Ariell Johnson to talk about her history-making comic and coffee house, what inspired it, and why your kids probably shouldn’t read “Deadpool”.

SUN: First of all, I’d like to thank you for the time, Ms. Johnson. I guess my first question is, how did you become interested in comics, or put another way, when did you know that you were a “geek”?

AJ: I probably didn’t use the term “geek” until later on in my life. But I liked things like the “Thundercats”, “He Man” and “Transformers”. I didn’t get into comics until I started high school. I was watching the “X-Men” television show on Fox and I saw Storm. I had never seen a Black, female superhero before and it changed my whole worldview. Out of interest in her character, I started reading those books. When I went off to college, I started to buy my own and by my junior year in 2003, I started to call myself a “geek” because by that time I was spending a lot of money on comics.

SUN: Where did the idea for Amalgam Comics and Coffeehouse come from?

AJ: I got the idea for Amalgam around the time I was in college. I had a little routine. I would buy comics from Fat Jack’s comic store on Sansom Street, then I’d go over to a Black-owned coffee shop across the street called the Crimson Moon. I would hang out and read everything I’d bought because it was cool to read comics in a social environment where you could hang out. When it closed, I fantasized about a place like that, but I wasn’t in a position to pursue it because it was hard to think beyond debt right out of college. But after a few years, things sorted themselves out. I was kind of unhappy with my career and wanted to do something that I was passionate about, so that brought the dream back into the forefront.

SUN: What happened next?

AJ: It took me about a year to actually find a space. I started searching in March 2014, but I didn’t find a space until November 2014. I had never opened a store before and I had never renovated an entire commercial space. We had a couple of false starts, which is not ideal, but is par for the course. We finally pushed through all of those things and with the help of family, I opened in December 2015.

SUN: How did you come up with the name? I know that there was a DC imprint called Amalgam Comics. Did you get the idea from that?

AJ: It came from an organic conversation that I had with a friend. We were brainstorming, and none of the other names that we were coming up with encompassed what we wanted it to be, which was a place for people who enjoy comics, coffee and the whole of “geekness”.  When my friend said that we wanted to represent an “amalgam” of things, it clicked because that’s what we are and what we’re trying to do. We can be whatever we want under that name and it works.

SUN: When I came to your shop, I was impressed with your selection. I even saw a $200 “Star Wars” comic when I was there. How do you decide what kind of comics you want to stock?

AJ: We have a pretty good selection, but I would like to expand our offerings. We were just single-issue comic books and coffee at first, then once the store was opened we started adding trade paperbacks. The $200 “Star Wars” comic was a fluke. My Comic Book Jedi Randy was going through some things, and this was online. It was a rare cover and we hope to have more of these items, but right now we’re focused on things that are going to move.

SUN: One of the things that I noticed about Amalgam is that there is a Kid’s Section that has more kid-friendly comics in it. What made you decide to do that?

AJ: We thought it was really important. A lot of comic book stores don’t give real space to kids and most people who stay into comics as an adult got into them as kids. Not giving kids that space potentially shrinks your market. You have to cultivate new readership.

It’s also nice when parents come in and direct their kids to the books that are safe for them to read. It’s an all-ages space so kids can look through anything in this area without fear.

AJ: Yes. If you’re not into comics, you think that it’s all “childish”. Meanwhile, your child gets a copy of “Deadpool”, or “Alias”, which are not really for kids because they deal with very dark themes. We’re helping parents navigate.

SUN: In every article I’ve read about you and Amalgam, the fact that you’re the only Black woman on the East Coast that currently owns a comic book store. I understand that there’s also another one in the South.

Were you surprised that with all the comic book stores across the country, there’s only two Black female owners?

Everything I do, I do as a Black woman, so I think that it’s important for little Black girls and boys, and people of color in general to see that there’s a place for us in the comic book world. It’s important to see that we all have interests that we might make us feel out of place, but when you see stories like mine, it gives you inspiration.

Amalgam Comics and Coffeehouse is located at 2578 Frankford Ave. in Kensington. It’s open from 8a.m. to 8 p.m. Tuesday through Saturday and 10 a.m. to 6 p.m. on Sundays.