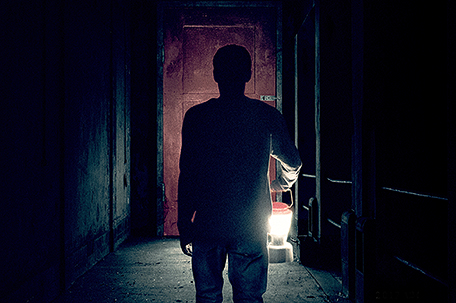 Paul (Joel Edgerton) found a safe refuge for his family far from the rest of humanity in the wake of a deadly plague that’s been decimating the planet. At least that’s what he thought about their remote hideout, until his wife’s (Carmen Ejogo) dad somehow caught the disease.

After allowing Sarah and their son (Kelvin Harrison, Jr.) to say their goodbyes through germ-proof respirators, Paul put a bullet in his ailing father-in-law’s head before he had a chance to infect one of them, too. While the body was being cremated, traumatized, 17 year-old Travis tried to comfort himself as well as his pet dog, saying, “Don’t worry, Stanley, I’m going to take care of you.”

But as any movie fan knows, such an assurance is ordinarily an ominous kiss of death in a horror flick. And true to form, Stanley’s the next to go in “It Comes at Night,” a claustrophobic suspense thriller set inside a darkened cabin in the woods.

The picture is the sophomore offering from writer/director Trey Edward Shults, who made an impressive debut a couple of years ago with “Krisha.” Here, the emerging wunderkind again makes the most of a micro-budget, crafting a harrowing tale guaranteed to make your hair stand on end.

The plot thickens when another family of refugees, desperate for shelter and sustenance, shows up unannounced. Against his better judgment, Paul invites the strangers to share their already meager rations, provided none of them is infected..

Patriarch Will (Christopher Abbott) assures him they’re healthy, but there’s something suspicious about the way that his wife, Kim (Riley Keough), keeps their baby covered up. Anyhow, the six proceed to pass a peaceful enough, if Spartan, existence until things mysteriously start to go bump in the middle of the night.

Whaddya expect to happen in a scary, spine-tingler with such a big hint in the title?

Battle: L.A.–Disgraced vet gets shot at redemption in apocalyptic sci-fi