“Come Away”: A Review 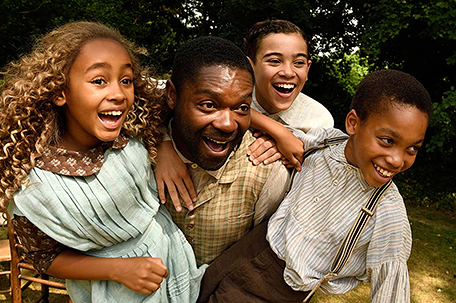 Lovers of fantasy are familiar with the stories of Peter Pan and Alice in Wonderland. Peter and The Lost Boys are famous for fending off pirates led by the evil Captain Hook, while Alice is known for her overactive imagination and desire to escape reality.

“Come Away,” directed by Brenda Chapman, takes viewers down a different kind of rabbit hole — one with more than just fairies, predatory pirates and an assortment of ‘drink me’ bottles.

“Come Away” is a coming of age and origin story about how it all started for Peter and Alice, who are reimagined as brother and sister in this story. The film stars David Oyelowo as Jack Littleton, Angelina Jolie as Rose Littleton, Keira Chansa as young Alice, Gugu Mbatha-Raw as adult Alice, Jordan A. Nash as Peter Pan, Reece Yates as David Littleton, Anna Chancellor as Eleanor Morrow and Michael Caine as Charlie.

“Come Away”, set in a charming English cottage in the countryside, tells the story of the Littleton family. The story centers around the whimsy of Alice, Peter Pan and David. The siblings’ adventures with pirates and tea parties blur the lines between fantasy and reality, as sticks and stuffed animals transform into real bow and arrows and crinkled bunny noses.

Tragedy strikes suddenly with the untimely death of David and the family is left to pick up the shattered pieces of their lives. Jack’s vice of choice is gambling, while Rose gets lost in the bottle.

Peter blames himself for his brother’s death. Like many children, Peter and Alice respond by doing everything within their power to bring their parents out of their despair, though their attempts are unsuccessful. A myriad of other sordid characters add additional elements of angst as the pieces of the lives the Littletons once knew begin to unravel thread by thread. “Come Away” serves as a sobering reminder of how delicate the beauty of childhood is and how fleeting innocence can be.

Although the film highlights the power of make-believe, it also reveals a reality that is much darker. The undercurrents of racism and classism, largely at the hands of Rose’s Aunt Eleanor, quickly shift from being subtle to blatant. Rose and Jack’s biracial children are frequently the target of Eleanor’s venom. She intentionally targets a young impressionable Alice’s psyche with notions like, “you want to be brought up in a civilized manner,” and “we’ll make a lady of you yet” and by presenting the frequent and wildly inappropriate notion that her father, a Black man, is of a lower class.

Tensions continue to build as the fight to fix things becomes the catalyst for Peter and Alice’s escape respectively. The audience sees glimmers of magic towards the end of the film with appearances from Tinkerbell, the Lost Boys, Captain Hook and the Queen of Hearts.

If audiences are looking for a light fairytale, “Come Away”, is not the story for you. The plot is layered and the beginnings of Peter Pan and Alice’s stories are not nearly as tidy as many might hope. The film does however provide an opportunity to see how one event can change everything in the lives of some of our favorite characters.

Alice eventually finds that her wonderland is back at home with her parents and Peter finds his happily ever after in Neverland. Hopefully the viewer will find some happy in the nostalgia of how it all might have started for Peter and Alice. “Come Away” is currently available at home On Demand. Check your local listings for more details.