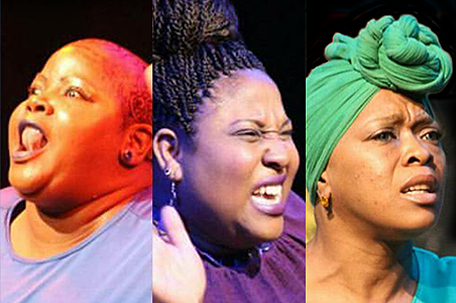 These are only a couple lines from one of the most profound theatrical displays ever to come to the stage.  If you in all your blackness are not familiar with For Colored Girls Who Have Considered Suicide When the Rainbow is Enuf, the revered choreopoem by Ntozake Shange, you need to get hip and right away.  Originally performed in 1974, this was Shange’s first and most profound production describing urban life for a septet of women with varying degrees of disappointments knocking on their respective doors.  They explain their hardships through harrowing poetry and intentional choreography.  For Colored Girls made it OK to lament and not be alright with the way things are, but also saved room for self-love, sisterhood, and rejoicing.  And there is no better time to revitalize the original black girl magic piece than now.

This summer, Penn’s Landing Playhouse put on the performance under the production and direction of radio personality and SUN contributor, Frankie Darcell.  The cast is as follows: Janae Brown (Lady in Brown), Lynette Clement (Lady in Yellow), Ontaria Wilson (Lady in Red), Elisha Peterson (Lady in Orange), Ebony Williams (Lady in Blue), Adrienne Allen (Lady in Green), and Mellitta McKethan (Lady in Purple).

I spoke with Lynette Clement and Janae Brown after the show and they gave me some insight on how they prepared for their respective roles, what it was like working on the modernized classic, and what the audience should take away from the production.

Speaking with Ms. Clement, she revealed to me this was her first stage play which is hard to imagine because of her polished performnce.  I wasn’t told beforehand I definitely would not have known, her performance was stellar and alongside the other characters, the charisma was infectious.  Both Clement and Brown watched Tyler Perry’s film version to place themselves into character.  Director Frankie Darcell “stretched and challenged us to push beyond what we actually thought was actually in ourselves, so it was an awesome experience.” Clement said with Brown echoing that “she’s all about sisterhood and support and that helped us bond.”  They want the audience to remember that although this play is about Black women, it’s universal, everyone can relate.

It would be amazing for this production to continue running, as there are still so many women who can benefit from watching a relatable storyline.  For Colored Girls was raw, gut wrenching, funny and sensual, in essence black womanhood personified.

Meet the woman behind the Colored Girls Museum