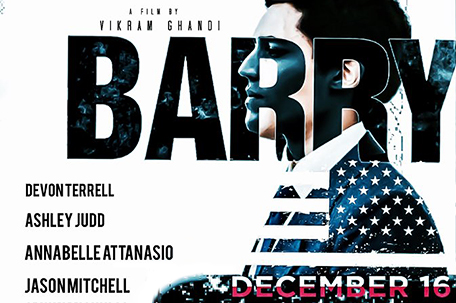 The second of two (that we know of) young Barack Obama-related films making a splash this year made its world premiere at the Toronto International Film Festival last month to favorable reviews, dubbing it a crowd-pleaser, and heralding star Devon Terrell as a talent to watch.

Titled simply Barry, and directed by Vikram Gandhi, the film is set in New York City, in 1981, and is inspired by true events, telling a story of a young Barack Obama as he tries to find his way as a college student in a new city, while faced with questions about race, culture and identity during what would be a crucial year in the future president’s life.

A week after its world premiere, Netflix bought worldwide rights to Barry, and has now set a December 16, 2016 release date for the film on the premiere subscription VOD service.

The official synopsis for Barry  reads: It’s the Fall of 1981 and a young Barack Obama — known to his friends as “Barry” — arrives as a transfer student at Columbia University. Thrust into Mayor Koch’s racially fraught and crime-ridden New York City, Barry finds himself pulled between various social stratospheres. As he struggles to maintain a series of increasingly strained relationships — with his Kansas-born mother, his estranged Kenyan father, and his classmates — glaring issues of inequality force him to confront questions surrounding his own identity. His experiences over that pivotal school year begin to shape his views on race, government, and what it means to be an American.

Devon Terrell (who won the lead role in Steve McQueen’s now-defunct HBO project Codes of Conduct) stars in the film as Obama, with Anya Taylor-Joy, Jason Mitchell, Ellar Coltrane and Ashley Judd rounding out the cast, playing his classmates and his mother (Judd).

The film is produced by Black Bear Pictures (The Imitation Game) and Cinetic Media.