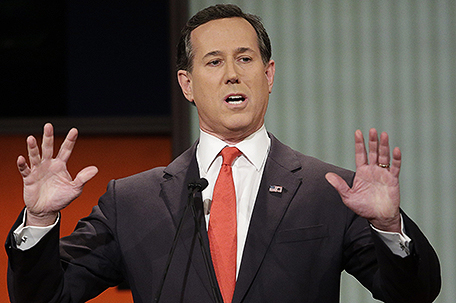 ABOVE PHOTO: Republican presidential candidate, former Pennsylvania Sen. Rick Santorum speaks during the Fox Business Network Republican presidential debate in North Charleston, S.C. on Jan. 14, 2016. The CNN analyst went on the network to try and explain comments about Native Americans that have led to criticism, but didn’t appear to calm things down. Santorum told a group of young conservative last month that there was ‘nothing here’ when immigrants founded the United States. That angered Native Americans and others. He said on CNN Monday that he was speaking in context of the U.S. government’s creation and didn’t mean to minimize treatment of Native Americans. (AP Photo/Chuck Burton, File)

On CNN, Santorum was a senior political commentator who was often tasked with giving the Republican point of view during campaign coverage. His parting ways with the network was confirmed Saturday by Alison Rudnick, vice president of HLN Communications and CNN Diversity and Inclusion.

He sparked controversy in an April 23 speech before the Young America’s Foundation, a conservative youth organization. Santorum said immigrants created a nation based on the Judeo-Christian ethic from a blank slate.

The comment prompted Fawn Sharp, president of the National Congress of American Indians, to call him “an unhinged and embarrassing racist who disgraces CNN and any other media company that provides him a platform.”

“To correct the record, what European colonizers found in the Americas were thousands of complex, sophisticated, and sovereign tribal nations, each with millennia of distinct cultural, spiritual and technological development,” she wrote in a statement.

Sharp called on CNN to fire Santorum or potentially face a boycott from more than 500 tribal nations and its allies worldwide.

Santorum later said on Chris Cuomo’s CNN show that he “misspoke” in the sense that it wasn’t clear that he was speaking in the context of the founding of the United States government.

“People say I’m trying to dismiss what happened to the Native Americans,” he said. “Far from it. The way we treated Native Americans was horrific. It goes against every bone and everything I’ve ever fought for as a leader in the Congress.”

Santorum’s comments have garnered blowback before, especially his views on gay marriage and homosexuality. In 2003, he infuriated gay rights advocates by appearing to compare homosexuality to pedophilia and bestiality.

Politically Uncorrected: Rick Santorum- Why he lost Pennsylvania & what it means