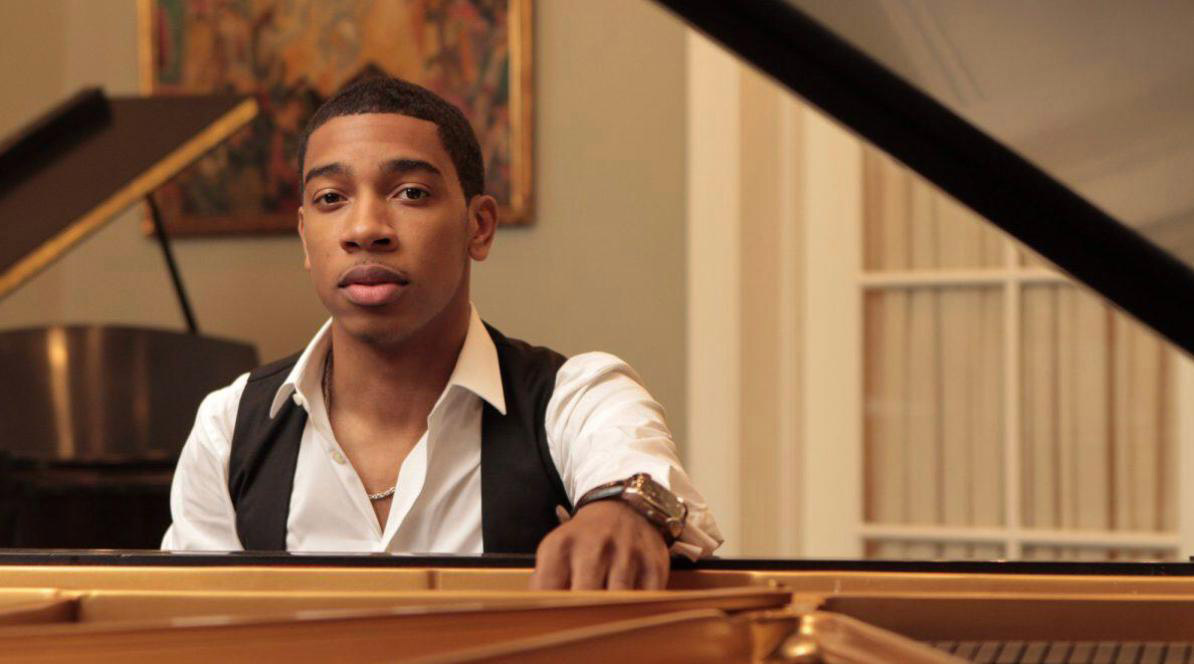 By Kharisma McIlwaine
Connecticut native Christian Sands began playing the piano when he was just a year old. His parents recognized his gift, and put him in official lessons when he was three or four. Sands was trained classically originally, but his love for experimentation and improvising with classical pieces, led his teacher to suggest he shift his training to jazz studies. The years of dedication, training and sharing his talent on stages across the globe have established Christian Sands as a world-renowned jazz pianist and composer. He is currently leading the Monterey Jazz Festival on Tour as the musical director. Sands sat down with the SUN to talk about his love for jazz and being a part of the festival.

Jazz is an art form that is constantly evolving and at its core it remains one of the purest forms of expression.

“It’s fascinating to me… I find it really interesting. A lot of music, even though stylistically it’s changed, the overall sense of it and the overall message of it has been pretty much the same,” Sands said. “I’ve always said that jazz is a reflection of the human spirit and the story of people. It’s always reflected what’s going on in life, or it should. It’s always done that no matter what generation has done it. Jazz has always reflected current events and struggle.”

Sands has played nationally and internationally with some of the most talented musicians in the world. He sites Christian McBride, Herbie Hancock and Quincy Jones as three of his biggest musical influences.
“They are people that have either been in my life or facets of where I’d like to be, and how that affects what I do with my music. When I see Quincy Jones, I see that being a singular device, like being a trumpet player or a piano player, doesn’t mean just being a trumpet player or a pianist. He’s so much more than that,” Sands stated. “Herbie Hancock is so much more than just playing jazz, and Christian McBride is so much more than just the feeling of it. It’s more than just this introspective look at, this is what I’m trying to say as an artist.”

The Monterey Jazz Festival, created in 1958, is the longest running jazz festival in the world. The Festival is known for bringing together a wide array of talented musicians for unforgettable performances. The Festival is currently on a 31-day tour all over the country, making a stop in Canada. The critically acclaimed artists featured on the tour include Grammy -winning jazz vocalist Cécile McLorin Salvant, Bria Skonberg on the trumpet and vocals, tenor saxophone player Melissa Aldana, Grammy-nominated drummer and vocalist Jamison Ross, Yasushi Nakamura on bass and Christian Sands as both the pianist and the musical director.

“I’ve been performing at the Monterey Jazz Festival for a number of years. It’s always been so much fun just being apart of the community and fellowship of the festival,” Sands said. “Being the musical director just means making sure people are comfortable. These are all professional musicians and these are artists on stage. Everyone has a different way of going about music. Sidenote — the great thing about this band, is that we’re all coming from different branches of the jazz tree. We all approach music a little differently or we want to present our music differently. The great thing is that we’re open to one another. We’re also all around the same age, which is great because we all have a similar background of music, similar things that we’re listening to, as well as some different things… but we’re also sharing that music together.”

Sands added, “Being the musical director is all about taking everyone’s ideas and putting them together so it’s cohesive. It’s a lot of fun because we have these great musicians. Really it’s about challenging them, challenging myself, challenging the audience and also putting us in different situations. Sometimes Cécile will sing one of my tunes, or I’ll play one of Melissa’s tunes or Melissa will play one of Bria’s tunes. The configurations are really endless with this band… it’s really exciting!”

In addition to this incredible tour, fans of Christian Sands can look forward to new music, the exploration of new genres, and a tour with the Erroll Garner trio featuring unreleased music and fan favorites. To support Sands on his journey visit http://christiansandsjazz.com/, or follow him on social media @christiansandsjazz on Instagram and @christiansands1 on twitter. The Monterey Jazz Festival on Tour will be at The Kimmel Center’s Verizon Hall on Saturday, March 23rd at 8:00pm. For more details or to purchase tickets visit https://www.kimmelcenter.org/