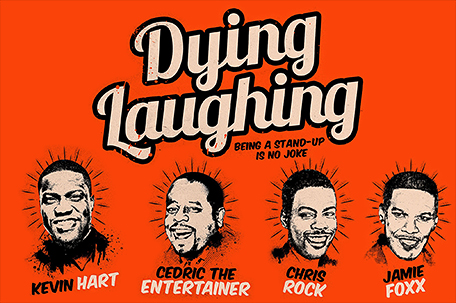 From directors Lloyd Stanton and Paul Toogood comes the feature documentary Dying Laughing, which is described as a candid look at the complicated and fascinating lives of some of the world’s greatest stand-up comedians.

Synopsis: A beautiful, moving, funny and unique feature-length documentary on the agony and the ecstasy of making people laugh. A stand-up comedian must be the writer, the director and the star performer—and in stand-up there is no rehearsal, no practice, no safety net, as it only works in front of a live audience, with feedback being instantaneous and often brutal.

For most people, baring their soul on stage and having an audience “boo” at you would become a life-long trauma, but for stand-up comedians, it’s a nightly challenge. The funny and heartfelt documentary contains original interviews interlaced with personal footage of life on the road—all from a comedian’s point of view. Once you take this step behind the curtain, you will never look at these funny folks the same way again.

Gravitas Ventures will release the film in theaters and  on-demand beginning on February 24.