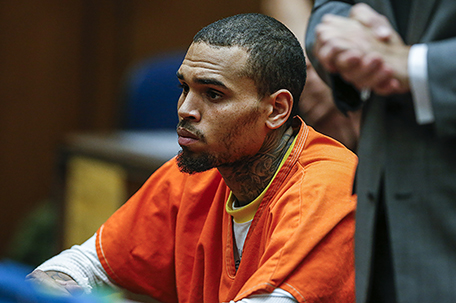 ABOVE PHOTO:  R&B singer Chris Brown appears in Los Angeles Superior Court on Monday, March 17, 2014. After a weekend in jail, Chris Brown has been ordered to remain in jail without bail for allegedly violating his probation stemming from his 2009 assault of then-girlfriend Rihanna hours before the Grammy Awards.  (AP Photo/Lucy Nicholson, Pool)

Chris Brown’s attorney has asked a Los Angeles judge to block an order that would transfer the jailed R&B singer to Washington, D.C., for his upcoming misdemeanor assault trial.

Brown is being held without bail and is due to go on trial on April 17 in the Nation’s Capital on the assault charge. Last week, a D.C. judge authorized U.S. marshals to transport Brown from Los Angeles for the trial.

The Grammy-winning singer’s lawyer Mark Geragos filed a motion Tuesday asking a judge to block that order and instead release Brown to his custody just before the trial date.

His motion states that Brown would lose the ability to confer with Geragos and prepare for the trial if he is transferred by marshals.

A hearing has been scheduled for Thursday on the motion.