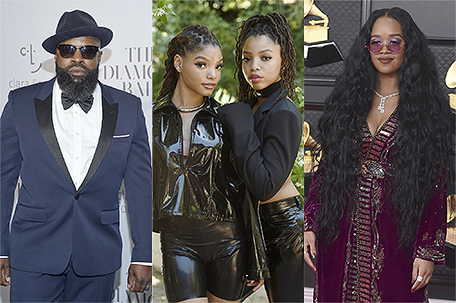 ABOVE PHOTOS: In this combination photo, Black Thought attends the 3rd Annual Diamond Ball on Sept. 14, 2017, in New York, from left, Halle Bailey and her sister Chloe Bailey, of Chloe X Halle, pose for a portrait in their backyard in Los Angeles on May 28, 2020, and H.E.R. arrives at the 63rd annual Grammy Awards on March 14, 2021, in Los Angeles. The artists and others have recorded songs honoring Juneteenth for Apple Music. Some artists recorded cover songs, while others composed new tracks for the exclusive “Juneteenth 2021 Freedom Songs” playlist, which launches Friday, June 4, 2021, on the streaming platform. (AP Photo)

Some artists recorded cover songs, while others composed new tracks for the exclusive “Juneteenth 2021 Freedom Songs” playlist, which launches Friday on the streaming platform. It comes about two weeks ahead of the annual holiday, also known as Emancipation Day and Freedom Day, that commemorates when the last enslaved African Americans learned they were free on June 19.

Commemorate Juneteenth at the Annual Festival in historic Germantown