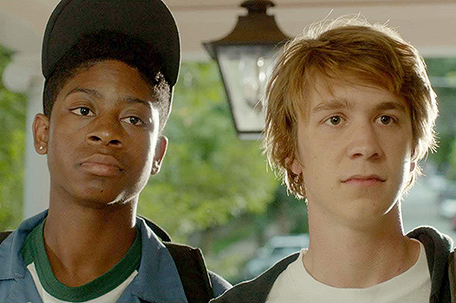 ABOVE PHOTO:  RJ Cyler as Earl and co-star Thomas Mann in a scene from “Me and Earl and the Dying Girl.”

The youngest of three boys, Ronald Cyler II was born in Jacksonville, Florida on March 21, 1995. He demonstrated a love of the arts and entertaining early on, teaching himself to play the keyboard and drums, and forming a dance duo with his older brother, Broderick, at the age of 12.

In the summer of 2012, RJ traveled to the West Coast to hone his skills at an acting camp. Encouraged by the experience, he asked his parents if they would consider relocating to Los Angeles to support his pursuit of a showbiz career.

With his family solidly behind him, he began meeting with agents, and subsequently signed with Landis-Simon Productions and Talent Management, as well as JLA Talent Agency. Here, he talks about making his acting debut in the title role of Earl in the screen adaptation of Me and Earl and the Dying Girl, which won both the Audience and Grand Jury Awards at the 2015 Sundance Film Festival.

Kam Williams: Hi RJ, thanks for the interview.

KW: I really loved Me and Earl and the Dying Girl. But so have all the critics and audiences. Congratulations!

RJC: The honesty of the film, and how realistically it treats teenagers. A lot of movies present us as only interested in romance, which is kind of offensive, since we’re a lot more complicated than that. We also have friends who are genuinely just friends. This script highlighted that aspect of the teenage mind, and I appreciated the fact that it was authentic and raw.

KW: What was it like playing the title character in your screen debut?

RJC: I’m still trying to wake up from the dream. It’s crazy, really.

KW: Were you familiar with the book the movie’s based on before you became attached to the project?

RJC: No, I only read it right before we started filming, in the week before production.

KW: Editor/Legist Patricia Turnier asks: Would you describe yourself as similar to your character, Earl?

KW: Patricia also asks: What message do you think people will take away from the film?

RJC: To be more appreciative of the many blessing that that we take for granted everyday, like our health and the simple ability to move our limbs.

KW: Patricia asks: How old were you when you knew you wanted to become an actor?

KW: Children’s book author Irene Smalls asks: What do you consider Me and Earl, a love story or a coming-of-age story?

RJC: It’s more of a coming-of-age story, because it doesn’t follow that boy-meets-girl, boy-dates-girl formula.

KW: Irene also asks: What were you most trying to communicate to the audience about your character?

RJC: That he wasn’t your stereotypical black best friend, but a character you learn from, since he serves as the moral compass of the film.

KW: Harriet Pakula-Teweles asks: How does a young performer who started out as a ”song and dance man” prepare himself for a performance on screen as a compassionate and caring teen?

RJC: By being genuine. I had no special technique for my approach to the character. The way that Earl handled situations was the same way that I would handle situations in real life.

KW: Sangeetha Subramanian says: RJ, I loved the trailer, and cannot wait to see the movie. What did you learn from this experience?

RJC: Every second on set was a learning experience. I mostly learned that less is more, that you don’t have to push for emotion. The movies that push the hardest for emotion are the worst movies. The genuine emotions and the genuine laughs that come unforced are the ones that people remember most.

RJC: ”Paddle Your Own Canoe” by Nick Offerman.

KW: I didn’t know he wrote a book.

RJC: He wrote two. I just got his new one.

KW: Did you see him in The Kings of Summer? That’s another great coming-of-age movie.

RJC: ”So Special” by Lil Wayne and John Legend.

RJC: The same powers as Superman.

RJC: Slipping on a melted carpet and hitting my head on the radio while running through our apartment when I was about 6 years-old. Now, there’s a patch on my scalp that doesn’t grow hair at all.

KW: Sorry about that. The Kerry Washington question: If you were an animal, what animal would you be?

RJC: There’s literally no difference. I just look way better on the red carpet, since I don’t wear suits on a daily basis.

RJC: Brand-wise, I really like Michael Kors and Prada.

RJC: The drive and tenacity to be creative, to take chances and to take that leap.

RJC: Faith in God will get you there. I promise!

RJC: I think Beverly Hills might do. Another area I’d like to live is close to the observatory, if I could build a little house there.

KW: What’s in your wallet?

RJC: A lot of business cards, some Canadian money and a picture of my brother Broderick who’s in the military.

KW: Thanks again for the time, RJ, and best of luck with the film.

To see a trailer for Me and Earl and the Dying Girl, visit: https://www.youtube.com/watch?v=2qfmAllbYC8