A chat with up and coming Oakland director Justin Tipping and the vision for his debut film, ‘Kicks’ 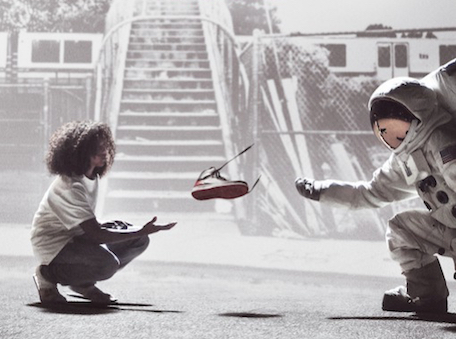 In a world where money and materialism are king and queen, many have lost sight of what is really important.  The link to footwear as a status symbol has lead to countless conversations about the newest Louboutins and Jordans in communities with much larger issues, i.e., dilapidated houses and horrible school systems.

When the desire for wealth is met with poverty, violence is often the result.  Oakland native and director Justin Tipping tackles some of these poignant issues and many others in his feature debut film Kicks.

Kicks is a coming of age story about a 15-year- old young man named Brandon played by Jahking Guillory. Brandon lives in poverty but believes the right sneakers are his ticket to the acceptance and respect he desires. His dream is deferred when neighborhood bully Flaco (Kofi Siriboe) beats him up, and takes his new kicks. Tipping shared a personal experience that led to the inception of this film.  “When I was 16 I was jumped and stomped out because I was wearing a pair of flash Nikes… That was kind of what started everything. It was really about the humiliation afterwards and how that beating and violence was kind of associated with what it meant to be a man… How that was a rite of passage somehow.”

Throughout the film, during Brandon’s most pivotal moments, an astronaut is present. Tipping explained why the images of the astronaut were key to the film. “It operated on two levels, the first was visually. There’s an association with innocence, imagination and hope. It also parallels Brandon’s loneliness. An astronaut in a public space on earth is inherently an outsider. He represents the idea of masculinity that is flawed.”

Addressing the concept of hyper-masculinity is complex. False ideas of manhood are widely accepted because they are taught. “You’re not allowed to really show emotion. The only emotion you can feel is anger and if you cry you’re weak.” Tipping stated. “Power and respect is what we’ve been taught and the quickest way to power and respect is to be violent… especially if you feel no worth and have nothing. I was trying to explore that and why that’s perpetuated. I do hope that at the end of the movie we can all have a conversation that there is hope to end the cycle.”

The cast, comprised mostly of people from the neighborhood where the film was shot, had a great deal in common. One sad commonality was that they all had a story related to gun violence. Tipping shared his hopes for audiences of Kicks. “I hope everyone has a moment of “holy crap” what just happened? With that reaction, start a discussion on the dark side of materials and cultural violence and how we frame what it means to be a man. I hope people start asking the right questions. If this material makes them angry or uncomfortable, I hope they can react to it in a way that makes some kind of social change.”

Kicks is a powerful catalyst for continuing the mission to dispel the connection between violence, aggression, and the ideals of manhood. Kicks is currently playing in theaters nationwide, check your newspaper movie guide for local theatres and times near you.