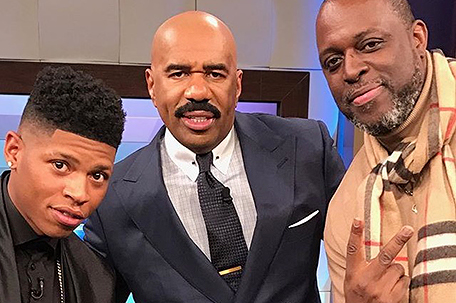 ABOVE PHOTO:  Bryshere ‘Yazz the Greatest’ Gray, Steve Harvey, and Charlie Mack on the set of “The Steve Harvey Show.”  (Courtesy of Kharisma McIlwaine)

Charles Alston, better known to the masses as Charlie Mack, has been a fixture in the Philadelphia community for well over three decades. If there is an event that facilitates and supports the growth of positivity in the Philadelphia community, Mack is on the scene. A plethora of celebrities, including Philadelphia’s favorites like Will Smith, DJ Jazzy Jeff, and “Empire’s” Bryshere Gray (aka rapper Yazz The Greatest) usually surround him. Mack is responsible for helping to shape the careers of many, and continues to use his expertise to do so.

Many wonder how Mack has managed to sustain a career in the entertainment world for as long as he has. Mack, credits his longevity to passion, ingenuity, and the desire to change lives for the better — principles that are at the forefront of everything he does.

Charlie Mack was gracious enough to give the SUN an inside look into the life of a man who seemingly and seamlessly does it all.

Mack got his start in entertainment during the late 1970s, working for the April Records label with Matthew Covington, a man he views as his surrogate uncle. After doing a combination of street team promotions and A&R for several years, Mack’s love for entertainment continued to grow. “It’s probably the longest relationship I’ve had that I didn’t cheat on… my love for entertainment. I loved any and everything about it, every form of it and I still do today.” He added, “I always say if you do something you love, you’ll never have to work a day of your life, and I do love it. I’ve never smoked or drank a day in my life, this is clearly my high,” he said.

The natural high that came with Mack living his passion has led him to impressive heights. While traveling and touring the world with some of the best in music, television, and film industry is a huge accomplishment for anyone, Mack sees his sustainability as his biggest achievement. “There’s not many people — and this is not to toot my horn — that came into a business in 1978 and are still relevant in 2017. The thing about life is you want sustainability. I’ve been sustaining all these years because the service makes me. I want to be known as the big brother of Philadelphia, the life changer, and a servant. That’s what it’s all about… it’s not about you, it’s about service. I’m heavily spiritual but I’m not religious, but because I’m a servant, God allows me to be at the level I need to be in order to serve.”

Mack credits Kenny Gamble, Julius “Dr. J.” Erving, Ray Ellis and the Philadelphia 76ers of the late ‘70s and early ‘80s for inspiring him to serve in a way that was uniquely his. “Charlie Mack’s Party for Peace came about because I lost two brothers to homicide over females,” Mack said. “I said instead of partying — and I partied a lot — we’re going to party with a purpose and we’re going to party responsibly.”

“I selfishly became Robin Hood,” he added. “I utilized all of my relationships I had with celebrities and my relationships with the community, and I brought them together in a very intimate way that had never been done before. It was up close, personal, grassroots, right in front of your door. You see Will Smith, Tichina Arnold… all these celebs walking down the street in front of your door.” 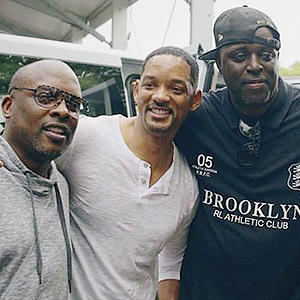 Eventually Mack’s role in entertainment evolved to a role in management.  He described this evolution as the logical next step. “Management was a natural progression after working with Jazzy Jeff and Fresh Prince, because I started road managing them and I tour managed Tatyana Ali. Being in that space you pick it up kind of by default. I’ve always been a creative person with ideas that I thought could help people. I’ve always been a person to look at you, analyze you and say “I could do this for you”. So essentially that’s management to a degree.”

Mack currently manages the uber-talented singing group Brotherly Love, and “Empire’s” breakout star, Yazz. Mack shared a few interesting anecdotes about what led to Yazz landing roles on two of the biggest television programs in the past decade: Fox’s “Empire” and BET’s “The New Edition Story.”

“Both came about through two long standing relationships; my relationship with Leah Daniels, Lee Daniels’ sister and his casting agent,” Mack recalled.  “I’ve known Leah since we were 15 or 16. ‘The New Edition Story’ came through my relationship with New Edition. I’ve known New Edition since they started in 1983, they’ve always been good friends of mine.” What initially started as a missed opportunity for an audition in LA, turned out to be kismet. “Yazz missed his flight, but God is so magnificent it happened on purpose! The execs called and asked what happened. They rescheduled for Monday. He gets on a flight, gets to LA and walks in the room to Taraji [P. Henson], Terrence [Howard], Lee [Daniels], Danny [Strong] and some other executives from Fox. Yazz didn’t break, he nailed it. They called us later that day and said he booked it.”

Similar to the casting of “Empire,” Yazz’s casting in “The New Edition Story”was equally unconventional.  Yazz originally looked at the role of Ronnie DeVoe, but after suggestions from Chris Robinson, Jesse Collins, Robbie Reed, and Mike Bivins’ wife; Yazz was casted as Mike Bivins. Yazz embodying the mannerisms of Bivins undoubtedly added to the success of ‘The New Edition Story’ and its 29 million views. “It was a wonderful experience. I’m overjoyed to be apart of something so successful. To have Yazz’s career start off with this TV show on a big network, and then be on this independent network BET… any talent could only wish for that success.”  Mack added. 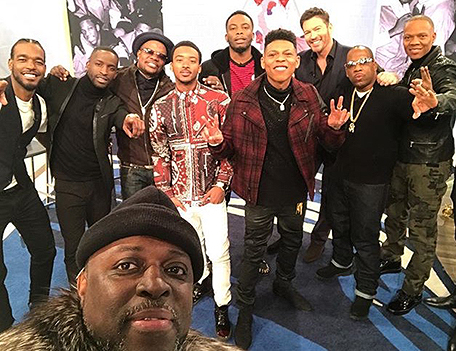 Bell Biv DeVoe, the cast of The New Edition Story, Charlie Mack and Harry Connick Jr. on the set of the “Harry” talk show. (Courtesy of Kharisma McIlwaine)

After the success of “Empire,” “The New Edition Story” and an abundance of producer credits, what’s next for Charlie Mack? The short answer, in true Charlie Mack fashion, is a little bit of everything. Mack and Philadelphia native, writer, director, and producer Jamal Hill have a number of projects on the horizon through their film company Philavision. “‘Deuces’ comes out on Netflix on April 1st,” Mack stated. “We have another film that we’re doing called ‘Star Struck’, which we’ll probably do over the next two years. Then I have this television show I’m trying to do on Netflix called ‘C.O.P. With Yazz.’ We have a film we just did called ‘Sprinter’; it’s going to be the first independent supported film under ‘Will and Jada Smith Presents’… an initiative supporting young talent, directors, writers, and things like that. We’re also doing a film on April 1st called ‘Canal Street in Chicago’. ‘Empire’ will be back in July, and we’re working on getting a single out on ‘Brotherly Love’ in May.”

With a full slate of projects ahead of him and a great deal of accomplishments behind him, Mack offered some advice to anyone looking to break into the entertainment business. “First off, don’t look for something mystical to happen… you’re not going to levitate,” Mack said. “You have to be clear that nobody is going to put you on, you have to put yourself on. You just have to work really, really hard, stay very humble, and stay very focused. Be the first one to get there and be the last one to leave. Be willing to do what the next man won’t do, but don’t ever compromise yourself. Never compromise your integrity for anything, at any point, at anytime for anyone. If you have talent, rely on your talent!”