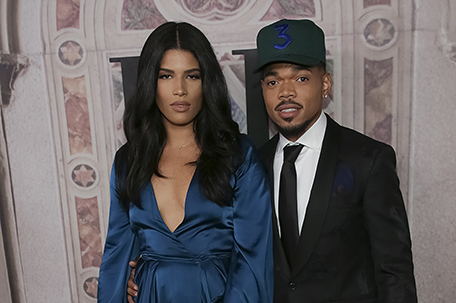 ABOVE PHOTO: Chance and Kirsten ((Photo by Brent N. Clarke/Invision/AP))

LOS ANGELES — Chance the Rapper tied the knot with his longtime girlfriend in a star-studded ceremony.

The Chicago-based rapper posted several photos of him and Kirsten Corley on his Instagram and Twitter accounts on Monday.

He captioned his photos with him sporting a white tuxedo with black pants and her wearing a strapless white dress writing “The Bennetts.”

The 25-year-old rapper, whose real name is Chancelor Jonathan Bennett, shared another photo of him with Kanye West, Dave Chappelle and Kirk Franklin.

Last week, Chance the Rapper posted a story on social media of how he met Corley when he was 9-years-old at his mother’s office party. He called their marriage “destiny.”