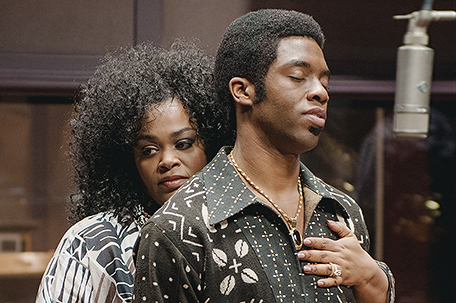 ABOVE PHOTO:  Jill Scott and Chadwick Boseman in a scene from ‘Get On Up.’

USA Today published a story on Universal Pictures’ James Brown biopic, Get on Up, adding some *color* to what we know of the project thus far, which is that it would be a “warts and all” telling of Brown’s life story on film.

USA Today’s story gets a bit more specific, adding that the story begins with a 6-year-old James Brown, as he’s abandoned by his mother (played by Viola Davis) and left to live with his Aunt Honey (played by Octavia Spencer), who runs a brothel. And the film ends in 1993 with a comeback concert, after Brown served prison time for aggravated assault and eluding the police in a wild car chase.

So it’s not quite a birth-to-death biopic. Brown would eventually die on Christmas Day in 2006 – 13 years after the movie’s ending.

The USA Today piece also states that star Chadwick Boseman (as James Brown) frequently speaks directly to the camera, breaking the so-called “fourth wall,” addressing the audience directly, and offering them insight into his choices – an interesting decision by director Tate Taylor, and producers Brian Grazer and Mick Jagger.

“I told everybody, ‘Look, James was a control freak, and even though he’s not with us, there’s no way he wouldn’t be a part of his movie,” Taylor says, as a reason for the 4th wall choice.

Universal has set the film’s release date for August 1, 2014, which isn’t too far away (five months from now); so I expect a first trailer/teaser to surface soon.

Get on Up was penned by Jez Butterworth and John-Henry Butterworth, who wrote the script for Fair Game, which starred Naomi Watts and Sean Penn.

Shadow and Act’s Jai Tiggett spoke to Chadwick Boseman recently about playing the Godfather of Soul, and the pressure to live up to portraying iconic figures:

JT: You’ve played Jackie Robinson, and now you have Get On Up coming up where you play James Brown. What sort of pressure do you feel to do these characters justice as icons in American history?

For instance with James Brown, there are a lot of people who only know the old James Brown. They’ve never seen him perform at Olympia or the  T.A.M.I. Show or any of that stuff. They don’t know anything about his influences. And so they’re judging you based on the one or two things they know or the one interview they saw. All those things, you sort of have to put out of your mind because you’ve studied it on a different level than them, and you have to be at peace with that.

JT: In terms of finding a balance between the true events and fictional story, do you feel you’ve achieved that?

CB: There’s always the battle between the truth and the movie, and there has to be some venturing from the truth just because you’re compressing it into such a short amount of time. There’s no possible way that you can show it exactly how it happened.

But you feel responsible for things being as authentic as they can be. You don’t want to show the sugarcoated version of the person. You’re not free unless you can show the good and the bad, all sides of them. So to me, when I play a character it’s important that I can show every aspect of them. And I feel like I’ve definitely found the truth.