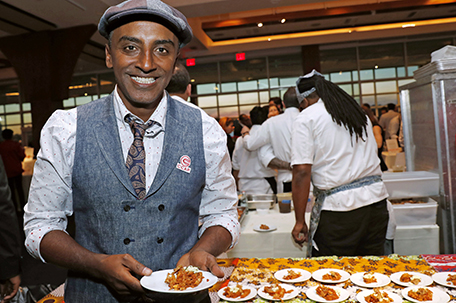 ABOVE PHOTO: Chef Marcus Samuelsson, who is Ethiopian, but was raised in Sweden, founder of Red Rooster Harlem and more than a dozen other restaurants, holds a tasting plate of Dorowat “lasagna,” with injera (Ethiopian flatbread), ayib (Ethiopian cheese), rosemary, and crispy skin, during the C-CAP (Careers through Culinary Arts Program) annual benefit, Tuesday, Feb. 27, 2018, in New York. (AP Photo/Kathy Willens)

Celebrity chef Marcus Samuelsson is widely known and respected in the culinary world. The Ethiopian-born Swedish chef, restauranteur, author, and television personality is known for his many contributions to the series “Top Chef Masters,” “Chopped,” “The Taste” and “24 Hour Restaurant Battle.” Additionally, the James Beard award-winning chef is known for his acclaimed restaurants located both stateside and internationally, which include Red Rooster, Marcus B & P, Marc Burger, C-House, Ginny’s, Street Bird, Marcus Montreal, and Swedish Supper Club.

Chef Samuelsson has embarked upon another culinary adventure with the release of the Audible Original series, “Seat At The Table.” Samuelsson and his co-host and co-executive producer Jonathan Waxman partnered with Audible to go behind the scenes and tell untold stories of some of the most iconic restaurants and restauranteurs in the world. Samuelsson spoke with the SUN about the joy of curating “Seat At The Table,” and what he hopes those stories give to audiences.

“That’s the beauty of audio writing,” he said. “If you work on it, you can really be close to the listener in a way. We worked on it for a long time but Audible gave us the space and time and provided us the opportunity to tell the right stories.”

“I wanted to share how we got to this moment of restaurants,” Samuelsson continued. “It’s a very special moment that restaurants are a part of everyday conversations about culture… that wasn’t always the case. The way restaurants go, for me it’s a mirror of America. You take some of the most iconic restaurants, like Dookie Chase with Leah Chase, as the first integrated restaurant in America — that sets the table for someone like myself to have an opportunity. That was really risk taking and game changing. She had to break the law to even be able to even serve Black and white customers. Think about Virginia Ali and [Ben’s] Chili Bowl in Washington D.C — it also tells the story of Washington D.C. and Black Broadway. So many Black stories are so under told. To partner with Audible knowing that Audible’s audience will reach a completely different audience… I just felt like it was a great opportunity and not just for foodies to share these incredible stories.”

In “Seat At The Table,” Samuelsson and Waxman highlight some of the most iconic chefs and restaurants in the world and share never before told stories.

“It was important to show Wolfgang Puck and Spago, which I think is almost like the Michael Jordan of restaurants,” Samuelsson said. “Jonathan Waxman, my partner on this, did such a great job interviewing Thomas Keller. We know Thomas for being this incredible chef, of course, but we didn’t know, for example, that Thomas Keller has been fired three times and wasn’t always destined to be a chef. I think those stories are inspirational for us to hear, because we know there’s a young chef out there right now having doubts. If she or he knows that even the great Thomas Keller had doubts, maybe that’s something they can relate to.”

“Seat At The Table” audiences are gifted with first-hand accounts of food experiences from people that know and love some of America’s most beloved restaurants and restauranteurs closely. In The first episode, audiences get to hear about the vibrant experience of Jezebel and owner Alberta Wright from people like Pauletta Washington, Vanessa Williams, and Samuelsson himself.

“I was fortunate enough to be a young pup living across the street from Jezebel, and every night it was Black excellence inside of that restaurant,” Samuelsson said. “It was Broadway coming in and eating with Alberta and she hosted them every night. I worked in Midtown and didn’t quite fully understand, and Alberta showed me. We worked with architects, but Alberta was the architect, she designed the restaurant. She was laughing at me. She said, ‘Don’t you have an opinion?’ For her, that was the ingenuity of Black women. We come here, we know how to cook, we know how to serve and set the dining room and that was the extension of her restaurant. It came natural to her — she never went to school — but there were no ceilings for her. A lot of these stories are pre-internet and if people don’t see it on the internet, they might never experience it. She did some things that none of us have — that’s why she’s such an important person in this. I wouldn’t have the vision to create Red Rooster without seeing Leah and being with Virginia and Alberta. Once you see it, one day you can build it and I needed to see it. I feel very fortunate.”

With so many incredible stories to share, Samuelsson spoke about the challenges of deciding who to feature on “Seat At The Table.”

“You can get a seat at that table next time,” he said. “It was a constant battle between Jonathan, myself, Martha and Jared, our producers — they’re great. We wanted to do what I felt like were some under-told stories. We wanted to show another side of a high-end restaurant like Thomas. We wanted depth in the storytelling and to talk about the rise of the female chefs like Gabrielle (Hamilton) and Leah with Dooky. It was all about carving out eight stories and I felt we did that. There were eight episodes, I wish there were 10 or 12, but hopefully, we can come back and do it again. Jonathan and I really enjoyed making and sharing the stories. We hope we can tell them again because it’s really an educational piece but also entertaining. If you’re coming in as a foodie or a new chef, you might not know all these stories. We can’t move forward unless we know where we come from and “Seat At The Table” does that.”

The incredible work and inspiring stories that Chef Samuelsson shares with listeners in “Seat At The Table” also served as a catalyst for opening his latest restaurant, Hav & Mar.

“Doing “Seat At The Table” informed me to do Hav & Mar — being inspired by Leah Chase, Virginia Ali,” he said. “We wanted to focus on women of color and leadership. Our key positions here, our chefs, our general manager, [and] our baker are all women of color. When you work like this, it truly informs and shapes the next step. To me, it’s about setting that table with new leadership and that’s what we’ve been able to do.”

“Hav” is a Swedish word that means ocean, [and] “mar” means honey in Amharic,” Samuelsson said. “Once we decided that, Derrick said this needs to be about Black mermaids. All the artwork is aquatic and is about Black mermaids. It’s giving this level of joy and mystic around it that is beautiful. A lot of color tonality comes from under the water. Our greens come from seaweed and so on… it’s about having that experience. Some dishes come from my background, and some are just fitting for being in New York City.”

At Hav & Mar, Samuelsson is not just setting the table with his leadership team, but he’s also carving out opportunities for Black farmers and vendors of color by using them to supply much of his food and beverage needs.

“The messaging comes through and to me that’s very special, and to do it together with Derrick Adams who is a great friend of mine, and an incredible artist is wonderful,” he said. “To be here in Chelsea and part of the community… this journey is really about joy.”

Samuelsson will undoubtedly continue to cultivate dynamic food experiences and push the needle toward progression in the food industry. His Audible Original series, “A Seat At The Table,” is available at: www.audible.com.  Hav & Mar is located at 245 11th Avenue at West 26th Street, NY 10001, in the Starrett-Lehigh building in Chelsea’s arts district. Be sure to follow Chef Marcus Samuelsson and support his culinary journey across social media platforms @MarcusCooks.

A Millennial Voice: A seat at the table