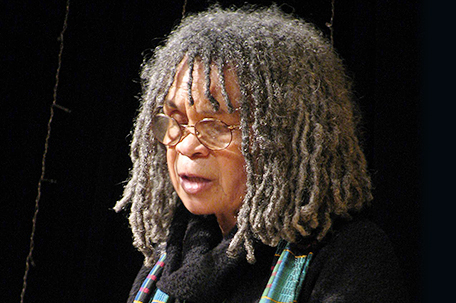 Recently the Arts Sanctuary hosted their 32nd Annual Celebration of Black Arts. The month-long celebration ended honoring legendary poet, activist, and professor Sonia Sanchez. An attentive crowd gathered at The African American Museum in Philadelphia  for a 90 minute screening of BaddDDD Sonia Sanchez. The documentary film directed by Barbara Attie, Janet Goldwater, and Sabrina Schmidt Gordon, tells the journey of Sonia Sanchez’s life and career through poetry and a few people that know her best. After the film, Dr. Sanchez took the stage for a Q & A session.

The 81-year-old poet, who shows no sign of slowing down, shared a funny anecdote from her recent travels. “Some people say to me when I go to travel “Oh Sonia, you’re still talking about change, and justice, and stuff? I have a good job, I’m making plenty of money.” Sanchez said, “I said good, you can help us out then… you can contribute.” She continued with, “we’ve got to look up and I understand that just one little thing you do you can bring about change, we’re not asking you to do everything.”

As Philadelphia’s first Poet Laureate, Sanchez has accomplished a great deal. Despite the accolade she has received over the years, Sanchez paused to remember the people she credits for her success.“We’ve lost so many people who have meant so much to me, that sometimes I would get up in the morning and sing “Good morning to you and how do you do? The trees they are blowing we know that it’s you.” I did that with Elizabeth, Maya, Ruby, Chenoa… The people that made my life possible. They were people who were very strong and stood up. People who said simply that you cannot just pass through this earth and just live only on barstools, or in front of the idiot box, live just for your job.”

After decades of activism, community work, and teaching, Sanchez adamantly urged us all to get involved in the fight for change. “The point is, as long as you’re on this earth, you’ve got to understand that we have got to involve ourselves with activism! We cannot lean back on her eyes and say “I’ve arrived.” I’m not too sure where that is if you have not involved yourself with activism and the whole idea of trying to change this place, this world.” To find ways to get involved in the black arts community visit artsanctuary.org. To see the legend Sonia Sanchez in person visit www.soniasanchez.net for upcoming appearances.