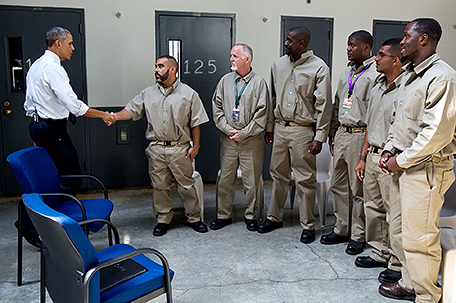 The new “Vice Special Report: Fixing The System”, takes a look at the impact the War on Drugs has had on the criminal justice system.

When Bobby Reed, whose brother Rickey is quoted above, found his business faltering due to an economic downturn, he borrowed money from a man who he said was “doing what he was doing”, or selling drugs.

When he couldn’t pay the money back, the dealer gave him drugs to sell. When he got caught, Bobby Reed was tried and convicted of conspiracy to distribute cocaine and given a life sentence.

He also left a family that realizes they will probably never see him outside again due to a non-violent drug offense, something that none of them can quite understand.

“Good people make mistakes,” Bobby Reed said. “You shouldn’t have to pay for it with your life.”

Stories like Reed’s abound in the new Vice Special Report “Fixing The System”, currently showing on HBO. The documentary, which is part of HBO’s “Vice News” series, talks about America’s overcrowded prison system, the mandated sentences that have attributed to this overcrowding, and the human cost of it all.

While this documentary has gotten a lot of attention because it includes President Barack Obama’s historic visit to a federal prison, it also includes interviews with former Attorney Gen. Eric Holder, federal judges tired of having no sentencing wiggle room, law enforcement officers who see little light at the end of the drug trafficking tunnel despite all of the arrests they make and recognize that a lot of these arrests are motivated by race and class, attorneys who try to negotiate the system, and the inmates and families caught in the middle.

Shane Smith, the founder and CEO of Vice News, serves as your tour guide through this maze that lets you know just how depressing this whole thing is from the strains of Johnny Cash’s “Wanted Man” that open the documentary.

What I have always liked about Vice News and the things they produce is that they’re chocked full of information you may not get anywhere else, and “Fixing The System” is no exception.

For example, while America makes up only 5 percent of the world’s population, it locks up 25 percent of world’s prisoners. You also find out that there are prison inmates who have been given more jail time for drugs than people who have committed much graver offenses like rape or child molestation.

Another thing that you get in this documentary that you might not get had someone other than Vice News done it is a series of questions put to Obama and Holder, the first African American President and Attorney General respectively, that directly connect the issue of race to the issue of incarceration. While both men didn’t come out and directly say that the system is racist, they did talk about how the prison system and society overall connect and how that connection has led to a desire to punish certain communities more harshly.

It was also interesting to see some of the old video from the time period that produced the laws that have led to this prison overcrowding. Most ironic, at least to me, were the videos of President Bill Clinton. In one, he’s patting himself on the back for signing the 1995 Crime Bill that led to the disparate sentences that got us here and the second was the apology he made for it at the NAACP convention in Philadelphia this summer.

But while the policy issues brought up in the documentary are interesting, it’s the impact on families and how that’s illustrated that has made me watch this documentary more than once.

There was the group of fathers at a Federal prison in Memphis that recognized the importance of staying in their children’s lives despite being behind bars and how that connection can keep these children from the same fate.

There were parents like Veronica Vega who longs for the day when she can hug her son, Jesus Chavez, again; kids longing for parents who will be behind bars for large chunks of their lives and families in Newark, New Jersey and Philadelphia who are afraid that their loved ones will be heading back to jail due to unpaid parole fees, fees that go unpaid because jobs are hard to come by for ex-offenders.

While there are parts of this documentary that seemed a little manipulative to me because of how in-your-face it was with some of the vignettes, there’s a lot to learn from “Fixing The System”.

Hopefully, those charged with making the necessary changes will do so.

Did “War on Drugs” target blacks?