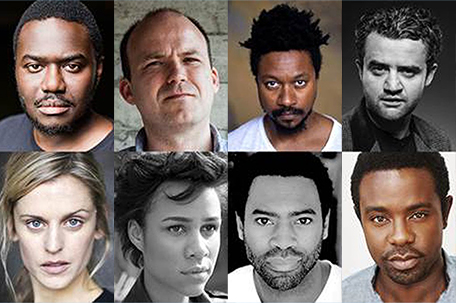 ABOVE PHOTO:  Meet the cast of the new Showtime Limited Series, “Guerrilla,” set to air in 2017.

Previously announced, Idris Elba and Frieda Pinto are also members of the cast.

Set to air on Showtime and Sky Atlantic (UK) in 2017, “Guerrilla,” which begins production in London this week, centers on a politically active couple who set out to change the world. The series is a love story set against the backdrop of one of the most politically explosive times in U.K. history. It tells the story of a couple whose relationship and values are tested when they liberate a political prisoner and form a radical underground cell in 1970s London. Their ultimate target becomes the Black Power Desk, a true-life, secretive counter-intelligence unit within Special Branch dedicated to crushing all forms of black activism.

Babou Ceesay plays the role of Marcus, whose partner Jas is played by Freida Pinto. Political activists, they quickly transform into hardened militants at war with a Special Branch unit dedicated to crushing all forms of black activism. Kinnear and Mays play the roles of Pence and Cullen, police assigned to a secret Special Branch unit that targets black activists on the streets of 1970s London. Ashton plays the part of Omega, who views herself as a leader within the black community; Gough joins as the tough and fiery Fallon; and Martello-White will play Dhari, an astute and charismatic radical. Pinnock will play Julian a calm, cool character and Brandon Scott joins as Leroy, a rough-customer who is dedicated to the movement but also has his own policies.

John Ridley (“American Crime”) will create, write and direct the series. Idris Elba will co-star and serve as an executive producer through his Green Door Pictures.

Ridley will write the majority of the episodes and will direct the first two and the finale, with Sam Miller (“Luther,” “American Crime”) directing the remaining episodes.

“I have wanted to tell this story for many years and I feel a great sense of responsibility towards the people and era that we are portraying,” said Ridley. “We have been given a rare opportunity to explore the kind of narrative that we do not usually see on television, and with the kinds of artisans who are not typically represented. I am extremely grateful and inspired by the brilliant and dedicated actors who have recently joined our team.”

Whilst the series is set against a background of social and political activism, at its heart “Guerrilla” is about a relationship under pressure, and the reality that for any couple there comes a point when the choices they make have real and lasting consequences.