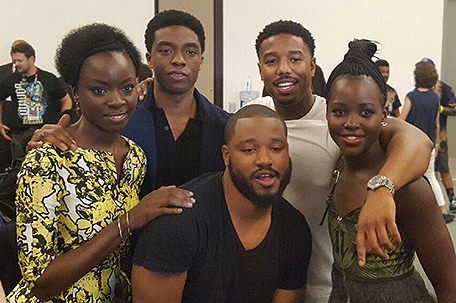 During Marvel Studios’ Hall H presentation at Comic-Con in San Diego (which is happening right now as I type this), Marvel’s “Black Panther” Producer Kevin Feige introduced fans to the rest of the film’s cast.

In addition to Chadwick Boseman, cast as film’s main character, and director Ryan Coogler, Feige also welcomed to the stage Michael B. Jordan, who will play Erik Killmonger (Black Panther’s nemesis, so it looks like he might be the film’s main villain); Lupita Nyong’o, taking the role of Nakia; and Danai Gurira as Okoye. Both Nakia and Okoye are of the Wakandan Dora Milaje– the “Adored Ones”– and are personal bodyguards of the Black Panther, recruited from every tribe of Wakanda. Chosen from rival tribes, their presences maintain a balance of power, preventing civil war.

Additionally, fans got their first look at the new logo for the film.

Coogler also shared that filming will begin in early 2017.

Boseman shared the photo of the cast, along with director Coogler, on Twitter. More to come as the event continues– assuming more is revealed!