Cast of TV One’s ‘Down for Whatever’ discuss storyline, careers and social issues 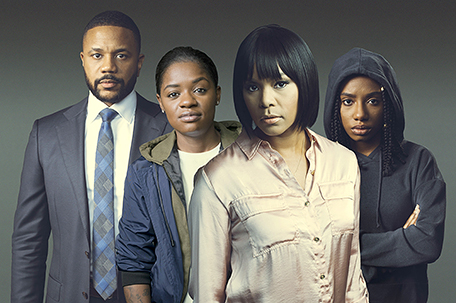 ABOVE PHOTO:  Cast of “Down For Whatever” left to right Hosea Chanchez, Bre-Z, LeToya Luckett, and Imani Hakim.

TV One has become a staple for original programming and content for the African-American community.

In that vein, the digital cable and satellite network has offered its first action feature film “Down for Whatever,” a hard-hitting crime drama that tackles the social issues of adoption, abuse, crime and police brutality.

The script, written by Tim Folsome, caught the attention of TV One during a national screenwriting completion, in collaboration with the ABFF that offered emerging writers an opportunity to showcase their work to audiences all over the country. The field was narrowed to three finalist, with Folsome winning the competition and a production of his script by TV One.

When preparing for the premier of the film, which aired July 22nd, Folsome and various members of the cast and production team participated in a panel discussion lead by TV ONE’s Tosha Whitten-Griggs.

“Down for Whatever” tells the story of Tracy, played by Luckett, a young successful doctor and her police detective husband played by Chanchez. The couple is happily married but a sense of family is missing in their relationship. Tracey grew up in foster care and longs for the traditional family she never had.

Luckett said of her character, “Tracey pulled on my heartstrings and I know there will be a lot of people who are able to relate to her story.

“Down for Whatever” is TV One’s first action film. Jubba Seyyid, the film’s executive producer and senior director of programming and production for TV One, shared his thoughts on embarking into new territory.

“This was an ABFF film contest that we were very happy to have,” he said. “So when we got this particular script and read it, we saw how it provided a very different entryway into the stories that we don’t usually go into… because it had more action than we were used to making. With action comes bigger budgets, stunt people, pyrotechnics and all kinds of things that can be associated with it.”

“There are a lot of layers to this film when you look at the story,” Seyyid continued. “When you look at adoption, assault, police brutality… we tackled a lot of issues in this film. I think we were able to execute it because we were all on the same page trying to achieve a goal; trying to do something that we all had experienced doing individually, but now coming together as a collective with the production company being Swirl and with TV One the network wanting to make the best film, especially in our first time tackling this genre.”

Hosea Chanchez was very candid about his journey to becoming Mike. He offered his thoughts on the challenges that came with playing a police officer.

“I was a little apprehensive at first because of the climate with cops in today’s society,” Chanchez said. “So every page that I turned, I was hoping there was something that I could grasp from this character that would allow me to have some conviction playing him. I did not want to put my personal judgments or thoughts into the character, but I think it’s a little bit hard today when you’re dealing with something so sensitive.”

“As I read the script, it was really touching and endearing and I thought that I could do this guy some justice,” he continued. “To me, Mike represented a person who just believed in the law unapologetically. He believed in the goodness of the word of the written law, as it stands, how it has advanced, how it has helped, protected and served so many of us on a daily basis. And then the disappointment that he faced by learning it’s not just about the written law. You have people who are humans, who have flaws…. they’re not perfect. That realization for the character was really what fueled me into it.”

Imani Hakim shared a similar sentiment when speaking about the complexities of her character Sonya, who for some was considered nothing more than a criminal at first glance.

“This is someone we’re not used to seeing me play, I guess – ‘the bad guy’,” Hakim said. “So that attracted me [to the role] naturally, just because it’s so different from anything that I’ve already done. It was a challenge that I wanted to dive into because it’s different and that’s what we want as artists.

While preparing for the role, Hakim focused on not judging her character as a “villain” or “monster.”

“I viewed my character as just another young girl who has faced adversity,” explained Hakim, who added that “it only takes one moment in our lives that can kind of sets the tone for the rest of our lives and where we’re going.”

Luckett and Chanchez also shared what their characters taught them about themselves.

“Mike is really very much like me in a lot of ways. It’s so beautiful when you get to experience a character that’s like you, but then when you watch the character you learn something about yourself that you can take into your future and change about yourself,” said Chanchez, who admits to being a person who sees things as “black and white.” “Growing up in the south with a very religious family, it’s really no gray. But as I’ve become an adult and a man, I realized that everything isn’t always just black-and-white… real life happens in that gray space.”

“LeToya is very colorful person she uses every color in the crayon box,” Luckett said. “But as far as Tracy [is concerned], I think because she didn’t not know her biological family and her background, she didn’t know which colors to use. She had to find her own way just through living her life on a daily basis.”

The story line reuniting Tracey and her sisters, according to Luckett, taught her so much about love and compassion.

“I learned so much from her!” he said. “I had so much compassion for this character because I know nothing about being in that space of not knowing a love like that. I think Tracy and Mike both learned about the gray area through this process and learning also that the gray area is ok!”

Folsome, much like his cast, also took chances with this project and went through a transformative experience while making the film.

“This whole process has been an experience for me,” he said. “This wasn’t even the script I was going to submit because I said ‘maybe this is a big budget… maybe they might not want to go for this.’ I’m so glad I submitted this project because this was my favorite script! The most important part of this whole film is the actors.”