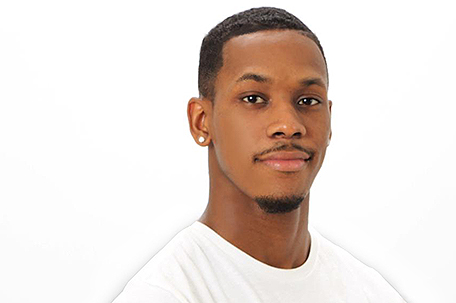 Percussionists can create sounds using any and everything available. And that’s exactly what performers have been doing in the physical theater production of “Stomp” since its inception in Brighton, UK in 1991. Over the past 20 plus years, “Stomp” has played to sell out crowds all over the world. “Stomp” the North American tour returns to Philadelphia for a six-day stint at The Merriam Theater. Long Island, New York native Cary Lamb Jr. joins the cast as Particle Man and spoke about his incredible experience in the production.

Lamb is a multifaceted performer who fell in love with the arts at 8-yrs-old. After rethinking a career as a math teacher, Lamb realized that dancing, singing and acting were in his heart. He studied theater arts at Stony Brook University in Long Island, not far from where he grew up. After graduating he began auditioning and worked with a variety of artists and venues including; Missy Elliot, Chance the Rapper and the New York Mets. Lamb shared how his diverse body of work prepared him for his role in “Stomp”.

“It’s really been awesome to explore and experiment especially being a young performer.” Lamb said. “A lot of people get typecast. I’ve been blessed to have so many different types of opportunity and gigs. That’s why going into “Stomp” just made sense. Working with these other artists that incorporated hip-hop, Latin beats and Broadway shows… all of that mixed together really prepared me.”

Lamb joined the cast of “Stomp” in summer of this year. Although the auditioning process comes with an array of challenges, Lamb shared how seeing “Stomp” as a child impacted his audition and experience in “Stomp” so many years later.

“It’s been a daunting task because I saw the show when I was 8-years-old. I remember going to the theater and seeing this amazing performance on stage… I wondered if I could do this. So when I went to audition and I actually recognize faces from when I was eight-years-old in the crowd, it just made me more energized and more empowered. I thought, yes I can do this. Thank God I got the job!”

“Stomp” is a show where there’s no talking, but we make the story, and make this musical out of found items. So instead of using traditional drums, we use pots and pans, trash bins, shopping carts, newspapers, plungers, and paint cans. We try to show that there’s music everywhere… music that you didn’t even realize was in your regular life that you walk past. You might be sitting on the train or the subway and you hear this rhythm. That’s what “Stomp” likes to do, we like to pull out that rhythm that you might’ve missed and put it center stage.”

“Stomp” which is comprised of eight cast members, incorporates percussion and dance in a way that tells an incredible story. In addition to its dynamic movement, “Stomp” shines a spotlight on an extremely diverse group of characters.

“My role is basically the swag of the show.” Lamb says of his character Particle Man. Everyone has their job, but I’m really there to fill in wherever there is a space. It gives me freedom to do whatever I want with that space. If everyone moves to the left, I can move to the right and do a flip, a cartwheel, or do a trick. It’s so fitting because of my dance background that I have this opportunity to really let loose on stage.” He added, “With “Stomp” you have to work, you have a listen and you have to jam with other people on stage. The best version of the show is when everyone is in sync, locked in and everyone is just giving and taking from one another. That’s what I really love and appreciate about the show. It really is everyone pulling their own weight and helping one another, and the audience can feel that.”

“Stomp” will continue to wow crowds from near and far. Cary Lamb Jr.’s career is well on his way. You can expect to see much more from this dynamic performer. Follow his journey and some behind scenes peaks of “Stomp” on Instagram @carylambjr.  “Stomp” will be at The Merriam Theater from Tuesday, December 26th through Sunday, December 31st. Visit www.kimmelcenter.org for more information on tickets and show times.