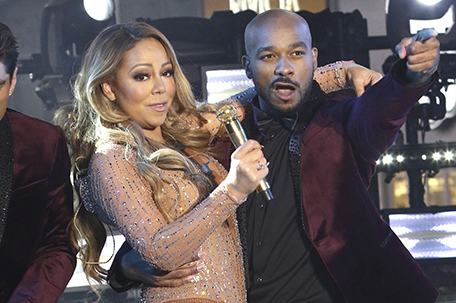 Few singers can match the career of the multi-octave superstar Mariah Carey, the winner of five Grammys who has sold more than 200 million records worldwide.

But sometimes, life gets a little strange in the spotlight.

She cursed on television during a 2013 appearance in Central Park that aired on “Good Morning America,” a performance also disrupted by a tear in the back of her dress. While singing “Always Be My Baby” on the “Today” show in 2014, she seemed to suffer from temporary voice freeze, as her mouth moved but for several seconds no sounds came out.

TV watchers also remember her wacky “ice cream cart” cameo on MTV and the sight of her needing four people to put on her shoes during a scene from the reality program “Mariah’s World.”

Then there was the humiliation of Glitter, Carey’s disastrous 2001 foray into film stardom, which was lambasted by the critics and public alike.

But nothing quite compares to the meltdown of New Year’s Eve, a case of what could be called “Auld Lang-ziety.”

A representative for Carey cited technical difficulties for a disastrous appearance on “Dick Clark’s New Year’s Rockin’ Eve with Ryan Seacrest,” which aired on ABC, and was the subject of widespread mockery on social media. Commentators called the fiasco a fitting end to a traumatic year for the music industry, marked by the deaths of Prince, David Bowie and George Michael, among others. One tweeter, referring to the 2016 presidential campaign, joked that Carey’s show had been hacked by the Russians.

Carey began with a brief, flawless “Auld Lang Syne” before descending into a show business nightmare. Her mood seemed to range from frustration to resignation as she struggled with the pre-recorded musical tracks. Telling revelers jammed into Times Square there had been no sound check for her hit song “Emotions,” she lamented that “we’re missing some of these vocals, but it is what it is.”

“Let the audience sing,” she decided as she paced the stage.

“I’m trying to be a good sport here,” she said, adding her own sarcastic review of the performance. “That was … amazing.”

The next song, “We Belong Together,” went no better. At times, she lowered the microphone from her mouth and the music, vocals and all, kept playing, making it clear she was lip-synching.

“Unfortunately there was nothing she could do to continue with the performance given the circumstances,” Carey spokeswoman Nicole Perna said Sunday.

A representative for Dick Clark productions did not immediately return an email seeking comment.

Carey later tweeted about the night, starting with a brief profanity, throwing in a couple of sad emojis and concluding with, “Here’s to making more headlines in 2017.