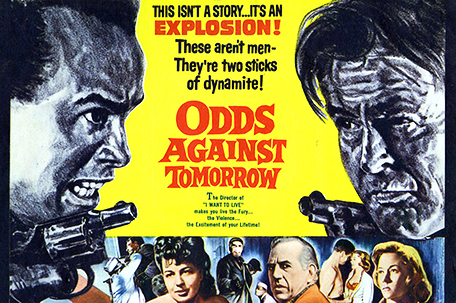 Over the last couple of weeks, we’ve been celebrating the 90th birthdays of Sidney Poitier (February 20) and Harry Belafonte (March 1) by recalling their past work (especially lesser known films) on the Shadow and Act blog and on our social media.

Hailed as a major accomplishment when first released in 1959, director Robert Wise’s film noir thriller “Odds Against Tomorrow” starring Harry Belafonte, Robert Ryan, and Ed Begley was different compared to most crime thrillers that had come before it, and certainly after it. Though on the surface it’s a heist thriller, which has been done dozens of times, the real premise focuses on race and the corrosive and destructive nature of racism.

It’s a tightly wound thriller, centering on two characters on the breaking point, pushed into a confusing and tense situation where their hatred and passions drive them to the point of extinction. The film revolves around a disgraced former cop (Begley) who comes up with a scheme to pull off a bank heist in an upstate New York town.

Unfortunately, Begley is the worst judge of people because, to help him pull off the heist, he enlists a bitter, racist ex-con (chillingly played by Robert Ryan – one of the great film actors) and Belafonte – a high living nightclub entertainer who’s up to his neck in gambling debts.

The hatred and jealously in Ryan’s character’s eyes in a scene early in the film, when he first sees Belafonte, a well-dressed Black man driving an expensive sports car, speaks volumes.

Needless to say, Begley spends a lot of his time keeping them from each others’ throats instead of working on the job at hand, but it’s clear that the heist is doomed from the start. Though the final ironic twist at the end of the film is heavy-handed, hammering home a message for the slow people in the audience, “Tomorrow” still remains an intelligent, tense film that grabs you from the beginning and remains true to its nihilistic noirish roots.

The film is a showcase of the amazing virtuosity of director Wise — still one of Hollywood’s most underrated directors, whose range of films was extraordinary – from musicals (“The Sound of Music” and “West Side Story”) to epic dramas (“The Sand Pebbles’) to horror (“The Haunting”) and sci-fi (“The Day the Earth Stood Still and “The Andromeda Strain”). 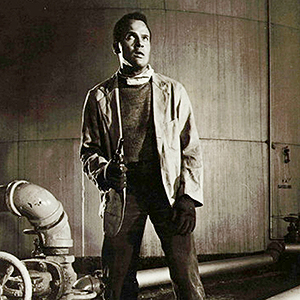 Harry Belafonte in a scene from Odds Against Tomorrow(Photo: UNITED ARTISTS / THE KOBAL COLLECTION)

Needless to say, all the performances are excellent. But, Belafonte especially stands out in role that perfectly captures his dangerous sensuality and magnetic presence.

Unfortunately “Tomorrow” was Belafonte’s last screen role for 11 years until 1970, when he made a comeback in the little-seen oddball fantasy comedy “The Angel Levine,” in which he played a Black Jewish angel sent to earth to help out an elderly Jewish tailor going through a rough patch. Belafonte’s frustrations with Hollywood, along with his political activism, pulled him away to concentrate on recordings, concerts and television during that time.

There is also an interesting backstory with the film, in that it was written by Abraham Polonsky, a major writer and director at the time, whose career was brutally cut short, along with hundreds of others involved in the entertainment business who were “blacklisted” during the “Red Scare” of the 1950’s by the U.S. Congress’ House Un-American Activities due to their leftist political beliefs and activities.

Though Polonsky wrote the film, he was not allowed to have his name on the credits since he was on the “do not hire” list of blacklisted artists in Hollywood. Belafonte was also blacklisted for a few years. So Polonsky arranged to have a Black novelist friend of his, John O. Killens, to be the “front,” taking credit for the screenplay. Polonsky wasn’t able to take credit for any film he wrote until 1969 with his Western, “Tell Them Willie Boy is Here,” which he also directed, starring Robert Redford. And it wasn’t until 1997 – two years before he died – when the credits on “Tomorrow” changed to rightly give Polonsky his screenwriting credit.

“Odds Against Tomorrow” was remastered and was finally released on Blu-ray via BFI Video, on October 24, 2016. The bad news is that, since BFI Video is a British label, the Blu-ray is a Region 2 disc, which means that, unless you have an all region Blu-ray player you won’t be able to watch the film here in the U.S.

But the good news is that it will almost certainly be released in the U.S. eventually through a label like Twilight Time or Kino Studio Classics. Both have been releasing older United Artists films from the 50’s through the 70’s, on Blu-ray.