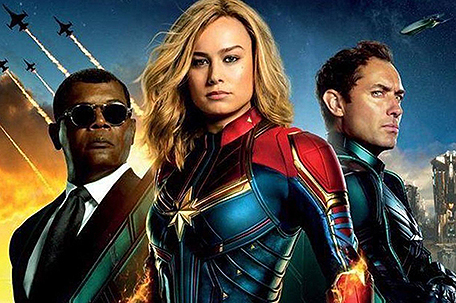 The latest addition to the Marvel Cinematic Universe, “Captain Marvel”, introduces us to the most powerful Avenger, ties up a few loose ends, and shows us that in some cases, a cat isn’t just a cat.

At the end of “Avengers: Infinity War”, S.H.I.E.L.D leader Nick Fury sent a text from a pager with an emblem that was red and blue with a yellow star.

In the new movie, “Captain Marvel”, we find out who was on the other end of that text, what she brings to the table, and how her presence answers more than a few of the questions that you might have had regarding the Marvel Cinematic Universe.

Set in the 1990s, “Captain Marvel’ stars Oscar-winner Bree Larson as the titular hero, a pilot named Carol Danvers who winds up super-powered after a plane crash with her mentor, a scientist who turned out to be a member of the intergalactic Kree people named Mar-Vell (Annette Bening).

(If the Kree sound familiar, they’ve also appeared in “Guardians of the Galaxy”, and on “Marvel’s Agents of S.H.I.E.L.D.).

Admittedly, the movie itself started out a tad slow to me. The flashbacks of Danvers’s past and the fight scenes with her mentor Yon-Rogg (Jude Law) notwithstanding, I didn’t really care all that much about her Kree training regimen, or the battle with their mortal enemies, the Skrulls, until they got to planet C-35.

Or, as we call it, Earth. Once the movie literally falls to Earth —- and lands in a Blockbuster Video store —-  it gets more interesting. We get to see a young Nick Fury (Samuel L. Jackson) without an eye patch, and a rookie Agent Phil Coulson (Clark Gregg). We meet Carol’s best friend and fellow Air Force pilot Marie Rambeau (Lashana Lynch) and her daughter Monica (Akira Akbar). We also meet the leader of the Skrulls, Talos (Ben Mendelsohn) who manages to shape into a few people before he’s finally caught,

We also meet Goose the cat. Or at least he looks like a cat. He’s actually a Flurkin, an alien being that does everything a cat does, except for the fact that it lays eggs, can hide things in pocket dimensions, and has tentacles coming out of its face when attacked.

In a lot of ways, “Captain Marvel” winds up being a typical origin story, complete with the requisite battle between good and evil, a crisis of consciousness experienced by our hero, and a resolution that takes her from one place to another.

But here’s the part where I tell you that in some cases “Captain Marvel” wears its feminist heart on its sleeve, which is kind of ironic when you consider that it took much longer for the Marvel Cinematic Universe to have a female-centered film than it did DC Films to do the same. Especially since DC Films never met a non-“Batman” centered franchise that it didn’t want to totally screw up.

For all intents and purposes, “Captain Marvel” fulfills its mission of being a bridge to “Avengers: Endgame.” You’re introduced to a character who is probably going to figure prominently in that film, and there’s enough of a base for Marvel to build on for a sequel, something that I kind of hope happens. It’s enjoyable, and while it won’t make you forget “Black Panther”, it’s got potential.