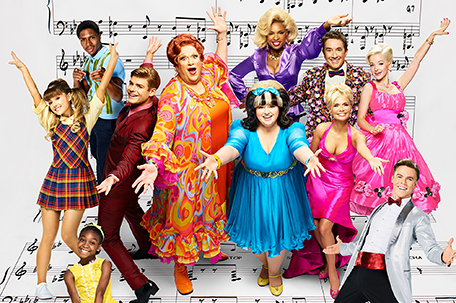 Many of you may remember last year’s TV premiere of “The Wiz” directed by Kenny Leon. NBC is bringing another fan favorite to the small screen with “Hairspray Live!”, based on the Tony Award winning musical that came to the big screen in 1988.

This is the story of teen Stacey Turnblad’s desire to sing and dance in the midst of a very segregated Baltimore during the 1960’s. Ephraim Sykes, known best for his roles in “Hamilton”, and “Luke Cage” stars as Seaweed J. Stubbs. Sykes is no stranger to the broadway circuit or hard work. His credits include; “Hamilton”, “Motown”, “The Little Mermaid”, “Newsies”, and “Memphis”. A successful Broadway career requires a lot of hard work and dedication. Touring stages all over the world led Sykes to an epiphany about life in show business. He candidly shared his feelings on the appropriately timed revamp, and his excitement about being part of the dynamic cast.

“I’ve been going from show to show literally non-stop for almost ten years now on the Broadway circuit. Since I left ‘Hamilton’, I’ve been able to rest, which is really what my body needs.” Sykes said. “That’s something I had to learn as an adult and an artist… that rest is as important to your work as the work itself, as important as the rehearsals, practice and working out. Your body, spirit and mind does need actual time to rest, recuperate, and grow.”

The latest installment of “Hairspray” is a star-studded affair. On board this time around includes Oscar-award winner Jennifer Hudson, Grammy winner Ariana Grande, and many more. Sykes shared his enthusiasm about working with a cast of this caliber. “I get this call on my first day away from “Hamilton” that I was going to be Seaweed in ‘Hairspray’ with Ariana Grande and all these people in it. I was in complete and utter shock… I think a single tear fell from my eye to my lap. I was stepping away from ‘Hamilton’ for the first time and wondering what was next and how to go about it and this is tremendous. I couldn’t have dreamt it!”

The timing of “HairsprayLive!”   couldn’t be more appropriate considering all of the current racial tensions happening in America. The Arts have always been a place where people could speak openly and honestly about society, culture, and injustice. Sykes spoke about the importance of the message of Hairspray. “I could not be more excited to be a part of the piece that is willing to do that. That’s willing to have this story in this conversation and be very real about it. Also I like that this piece is doing it without beating anyone over the head with the message, not with something that is too preachy or direct or in a way that could exclude anybody in anyway.” He added, “It’s a very upbeat, loving, embracing story that still manages to be real about a topic that affects me every day of my life as a young Black man. I couldn’t have asked for a better scenario for me to be in a live musical television show.”

If you missed the TV production, “HairsprayLive!” is available to stream online at www.hulu.com. Check your local listings for additional showtimes.