Cameron and Lauren share lessons, life after ‘Love Is Blind’ 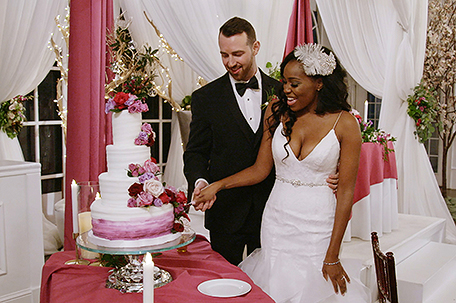 ABOVE PHOTO: Cameron Hamilton, left, and Lauren Speed in a scene from the romance reality series “Love is Blind.” The couple, who have never met face-to-face, decided to get engaged based on the emotional connection they make while dating behind walls. The couple have been married for a year and a half.  (Netflix via AP)

The couple met on “Love Is Blind,” a Netflix reality show where couples who have never seen each other face-to-face can decide to get engaged based on the emotional connection they make while dating in “pods.” After getting engaged, they finally see each other, take a trip, meet the family and have a wedding.

AP recently sat down with the married couple to find out what’s happened in the year and a half since the show was filmed and their feelings about the experience.

Answers have been edited for brevity and clarity.

AP: How has it been since the show?

LAUREN SPEED: It’s been amazing. Just the outpouring of love from people, you know, not only here in the States, as they say, but from around the world, just people saying that they’re inspired by our story, that they can relate to our story.

CAMERON HAMILTON: Yeah, we never imagined that our love story would have this type of impact. I think, when we fell for each other, that was the focus, was making our relationship work.

AP: Was it a challenge hiding your relationship?

HAMILTON: Absolutely. And, you know, we wanted to live our lives and, you know, like we went to vacation together in Cancun and some of the fans saw the reflection of Lauren in my sunglasses and dissected it.

SPEED: Literally zoomed in, like, ‘Wait, that’s Lauren. That’s her shape, that’s the color she had on.’ So that was kind of crazy.

HAMILTON: Yeah. Even like the Christmas tree. Lauren had a Christmas tree on Facebook. I think I had one on Instagram, (they) compared the decorations on the tree. So, it’s wild.

AP: What has taken place over the last year and a half?

HAMILTON: We’ve been growing together every day. I think we’ve started to kind of mirror each other and pick up some of our attributes that we have. I mean, everyone sees Lauren. She’s such an outgoing, fun person. So, I look up to that aspect of her. I want to be more like that.

SPEED: Ahh, babe. Well yeah, just continuing to blend our lives and blend our families, raise our fur baby. … You know, it’s almost like we’re still dating because we got married and then we’re kind of like dating each other. So, we’re in a fun dating adventure.

AP: You talked about being an interracial couple on the show. Did you feel that was over-dramatized?

SPEED: I feel like, you know, as an interracial couple, it’s definitely something that we addressed and we talked about and we communicated about. And I was very transparent with Cameron about how I was feeling. And even with the show, talking to the people or the audience, you know, just sharing my emotions and feelings, I wanted to be authentic. I wanted to be real… But it seems like the show kind of made it like right at the forefront. Like every time we sat down, it’s like, ‘You know, I’m Black and you’re White.’ ‘Hey, you’re White and I’m Black.’ But it wasn’t like that.

HAMILTON: And it was important to us to talk about, of course. So, it’s good that it was covered in the show, absolutely. I would have liked to have seen even more content of our dates and the things that we talked about, you know, like how we were going to raise a family together, you know, how we would discipline our kids together. You know, these types of conversations that added more layers to our relationship.

AP: Lauren, did you decide to keep your apartment?

AP: When did you know that you would say ‘yes’ at the altar?

SPEED: It was a decision that I didn’t take lightly… So, I would say even up until that day… I was a hermit before this show, like, I stayed in my apartment. And now I’m talking about being married and sharing a space and having a husband and becoming a wife. So that’s a big thing. So, I really thought about it thoroughly, and I’m happy with my choice.

HAMILTON: It’s hard to say what day, you know, in the process, but, it had gotten to a point where I had asked Lauren all the questions that I felt like I needed to ask. You know, ruled out any possible red flags. You know, we talked about long-term compatibility, family values, how we’re going to balance a household together, responsibilities, all these different things. And I mean, every conversation we had, I never had any doubt instilled in my mind from the conversations, it just felt right.

SPEED: Yeah, I was like, ’You don’t have any doubts? Not one? Come on. You’ve got one. And he was like, ‘No.’ So, I mean… it helped me realize, like, ‘Wow, this man really loves me.’ Like I’ve never had someone that was so ready and loving and willing. Like, ‘No, I know you’re my wife.’ Like, no doubts. So, yeah, that was beautiful… Are you crying?

SPEED: We cry a lot. We’re a crying relationship.

AP: You do see men cry on the show.

SPEED: It’s so important for men to be comfortable with their emotions. It’s like men feel like you can’t be masculine and also willing to be vulnerable when it comes to love or even just in general with, you know, showing your emotions. So I think that a lot of people really appreciated that with you.

HAMILTON: And my viewpoint on it is … if you’re willing to be that vulnerable to show how sensitive you are, to me, it’s a sign of strength. I’m not afraid to show my emotions. I know people might think it’s not masculine to cry, but I mean, I’m a very sensitive person, emotional person. So, I’m going to put it out there and that’s just how it is.

AP: What was the biggest thing you learned?

SPEED: That vulnerability is strength. And that love is not aesthetic. It’s so much deeper than that. Like it’s about your heart. I know that sounds cheesy, but it’s so true. Like it’s not surface.

HAMILTON: Yeah. And on that same vein, I think that people shouldn’t be afraid to be who they are. You know, they shouldn’t feel pressure to perform. You know, I think people can relate to you the most when you are just yourself. Even if it’s a little awkward or goofy.

SPEED: And love who you love. There’s somebody out there who will love you for you exactly how you are. Like, you don’t have to change yourself to make somebody like you. Be yourself.

SPEED: So, Cameron and I, we know that there has been a lot of supporters that are like, you know, ‘What are you guys doing now?’… So, we’re starting YouTube to kind of continue letting our family, as we call them, into our life, like our day to day. It’s called ‘Hanging with the Hamiltons.’ So, we’re excited to continue our journey with you guys.