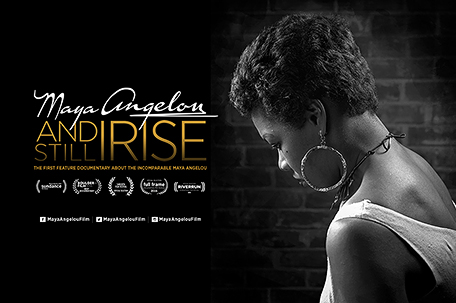 “Maya Angelou: And Still I Rise” premieres nationwide Tuesday, February 21 at 8 p.m. on PBS (check local listings) during Black History Month as part of the 31st season of THIRTEEN’s American Masters series. PBS Distribution will also release the film on DVD the same day, with additional bonus features, and on Digital HD February 22.

With unprecedented access, filmmakers Bob Hercules and Rita Coburn Whack trace Dr. Angelou’s incredible journey, shedding light on the untold aspects of her life through never-before-seen footage, rare archival photographs and videos and her own words. From her upbringing in the Depression-era South and her early performing career, to her work with Malcolm X in Ghana, and her many writing successes, including her inaugural poem for President Bill Clinton, “Maya Angelou: And Still I Rise” reveals hidden facets of her life during some of America’s most defining moments. The film also features exclusive interviews with Dr. Angelou, her friends and family, including Clinton, Oprah Winfrey, Common, Alfre Woodard, Cicely Tyson, Quincy Jones, Hillary Clinton, Louis Gossett, Jr., John Singleton, Diahann Carroll, Valerie Simpson, Random House editor Bob Loomis and Angelou’s son, Guy Johnson.

“It was a unique privilege to be the first filmmakers to tell Angelou’s full story and exciting to uncover stories that most people hadn’t heard,” said co-director and co-producer Bob Hercules (“Joffrey: Mavericks of American Dance,” “Bill T. Jones: A Good Man,” “Forgiving Dr. Mengele”).

“The film reflects on how the events of history, culture and the arts shaped Dr. Angelou’s life, and how she, in turn, helped shape our own worldview through her autobiographical literature and activism,” said co-director and co-producer Rita Coburn Whack (“Curators of Culture,” “Remembering 47th Street,” “African Roots American Soil”).

“It is bittersweet that Angelou takes her rightful place in the American Masters series posthumously,” said executive producer Michael Kantor. “We are fortunate that Bob and Rita captured these insightful interviews with her just prior to her death so we can all learn from her wisdom firsthand.”

Today, “American Masters” launches a year-long online campaign, #InspiringWomanPBS, based on themes central to Dr. Angelou’s life: artistic expression, academic success, active community engagement and acceptance of difference. People can share stories of inspirational women in their own lives via text, images or videos on the American Masters website (http://pbs.org/americanmasters) or via Tumblr, Twitter and Instagram using the hashtag #InspiringWomanPBS.

A video compilation series of the best submissions will be featured on PBS’ Instagram Stories and Snapchat channels throughout the year. Additionally, previously unreleased videos from “Maya Angelou: And Still I Rise” and “In Their Own Words: The American Masters Digital Archive” will be released as part of the campaign, as well as new episodes of the American Masters Podcast.

“Maya Angelou: And Still I Rise” premiered to critical acclaim at the 2016 Sundance Film Festival. It won the Audience Award at AFI Docs and was featured at notable film festivals worldwide, including Full Frame, Sheffield, IDFA and Seattle, winning 17 awards on three continents, and has been nominated for an NAACP Image Award.