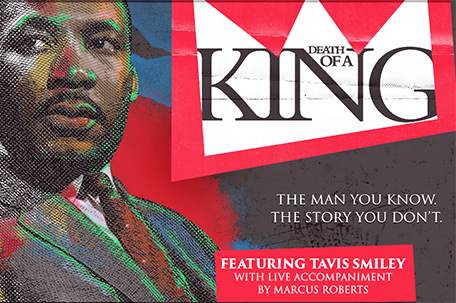 Tavis Smiley, broadcaster and best-selling author, will bring Death of A King: A Live Theatrical Experience to the Kimmel Center’s Merriam Theater in Philadelphia on Friday, February 2, 2017 at 7 p.m. This multi-media stage presentation of Smiley’s best-selling book, “Death of A King: The Real Story of Dr. Martin Luther King Jr.’s Final Year” commemorates the upcoming 50th anniversary of his death. Tickets will go on sale to members on Tuesday, October 31, 2017 at 10 a.m. and to the public on Friday, November 3, 2017 at 10 a.m.

Smiley narrates this joyful tribute that tells the little-known story of Dr. King’s final year. Against all the odds and with his popularity in deep decline, King summoned the courage, conviction, commitment, and character to bring a message of peace, equality, and justice to a bitterly divided nation. Joining Smiley will be renowned jazz pianist, Marcus Roberts, a genius of modern piano, who will be performing stirring, original compositions. Roberts’ new album, “Trio Crescent: Celebrating Coltrane,” debuts later this month. Tony Award-winning Broadway and film director Kenny Leon (“A Raisin In The Sun,” “The Mountaintop,” “August Wilson’s Fences”) serves as creative consultant.

This stage presentation — sponsored by Walmart — brings together elements of visual imagery and live music with eloquent prose, declaring the truth of the impact that one man’s integrity and strong faith in humanity had on the American people, and people across the globe– a truth as timely today as it was 50 years ago.

“We are privileged to host Tavis Smiley on our Kimmel Center Cultural Campus as he looks back half a century and honors Dr. Martin Luther King, Jr,.” said Anne Ewers, President & CEO of the Kimmel Center for the Performing Arts. “We are proud to be a venue where the Philadelphia community can gather to discuss some of the most important social topics of our day. We hope all who attend are saturated with the power of Smiley’s words and the renewed knowledge of the importance of history.”

“In our current political climate, ‘Death of A King’ represents a narrative shift that’s not just about the normal discussion of left versus right and conservative versus liberal, but really a reset of our deepest values,” said Tavis Smiley. “Dr. King said in 1968 we needed a revolution of values, and 50 years later, ‘Death of A King’ aims to reunite America with its best self.”

The book “Death of A King” is a New York Times best-seller, and is being developed as a television event series with Emmy Award winner J.J. Abrams and Smiley as executive producer, in partnership with Warner Bros. Television.  Smiley’s PBS late-night talk show, Tavis Smiley, is currently in its 14th successful season.

Death Of A King:

A limited quantity of VIP tickets are available and include an exclusive opportunity to meet Tavis Smiley at a post-show photo experience. VIP ticket holders will receive an autographed copy of the official Death of A “King” tour book, along with a CD featuring Marcus Roberts’ original music composed for the production.

For additional information about this unique event, please visit www.DeathOfAKingTour.com.