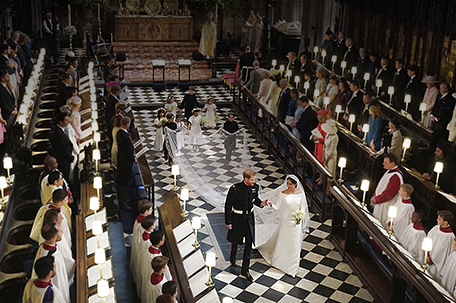 ABOVE PHOTO:  Britain’s Prince Harry and Meghan Markle, leave after their wedding ceremony at St. George’s Chapel in Windsor Castle in Windsor, near London, England, Saturday, May 19, 2018.  (Owen Humphreys/pool Photo via AP)

LONDON — Unwilling to kiss Prince Harry and Meghan Markle’s wedding goodbye just yet, Britain basked Sunday in the scale of the spectacle as major broadcasters kept scenes from the royal nuptials on repeat along with fresh interviews with the bride’s dressmaker.

The newlyweds have not been seen in public since they left Windsor Castle in a rare 1968 Jaguar convertible for a Saturday night reception hosted by the groom’s father, Prince Charles. 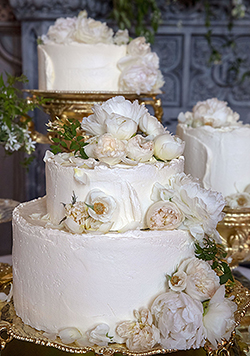 THE WEDDING CAKE for Prince Harry and Meghan Markle by Claire Ptak of London-based bakery Violet Cakes on display in Windsor Castle in Windsor, near London, England, Saturday, May 19, 2018. (Steve Parsons/pool photo via AP)

They were expected to return to their home at Kensington Palace in London on Sunday, but the palace did not provide updates or details.

Markle’s bridal bouquet was laid at the Grave of the Unknown Warrior at the British capital’s Westminster Abbey.

But anyone with a lingering case of royal wedding fever could join the tourists and locals soaking up the romantic mood and continued sunshine in the town of Windsor, where Saturday’s wedding and post-service carriage procession were held.

Good wishes poured in from around the world. British singer Adele posted a message on Instagram Sunday along with a photo of herself wearing a veil and toasting with a glass of champagne.

She wished the couple well and invoked the memory of Princess Diana, Harry’s late mother.

“Congratulations Meghan and Harry,” she wrote. “You’re the most beautiful bride. I can’t stop thinking of how happy Princess Diana is upstairs.” 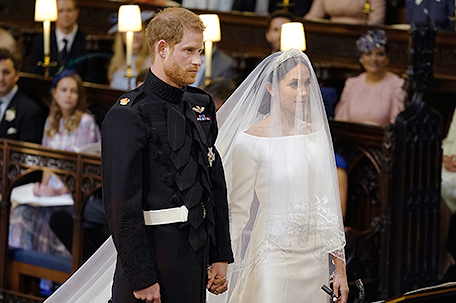 Britain’s Prince Harry and Meghan Markle stand, prior to the start of their wedding ceremony, at St. George’s Chapel in Windsor Castle in Windsor, near London, England, Saturday, May 19, 2018. (Dominic Lipinski/pool photo via AP)

Kensington Palace did not release details, but photographs showed Markle, now known formally as the Duchess of Sussex, wearing to the evening reception a large, emerald-cut aquamarine ring that Diana wore often before she died in a Paris car crash in 1997. 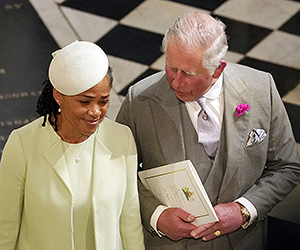 Britain’s Prince Charles and Doria Ragland, mother of the bride, depart after the wedding ceremony of Prince Harry and Meghan Markle at St. George’s Chapel in Windsor Castle in Windsor, near London, England, Saturday, May 19, 2018. (Owen Humphreys/pool photo via AP)

The wedding was the only topic of the day in Britain’s newspapers and on its television networks.

The tone of the press coverage was congratulatory, with publications taking pride in the evident British flair for producing memorable events with fantastic settings and split-second precision.

Former British Cabinet minister Peter Mandelson told ITV Sunday that the wedding was so moving that he is now considering proposing marriage to his longtime partner.

“People all over the country are going to feel inspired, they are all going to want to run out and get married now,” he said. 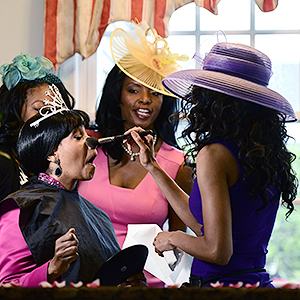 PAULA JACKSON of Philadelphia, left, receives makeup from makeup artist Pietra Dunmore, right, while Daily News and philly.com columnist Jenice Armstrong of Burlington, N.J. looks on during a television viewing party of the royal wedding of Meghan Markle and Prince Harry Saturday, May 18, 2018, at the Armstrong-Turner residence in Burlington, N.J. (AP Photo/Corey Perrine)

The royal family, understandably thrilled by the good weather and good will, expressed gratitude to the visitors and viewers who came to Windsor or tuned in via TV.

“Thank you to everyone who came to Windsor and those who followed from around the UK, the Commonwealth, and the world,” the royals said.

After the big day, Queen Elizabeth II returned to her normal routine. She was seen being driven back to Windsor Castle after attending a Sunday morning church service.

The designer of Markle’s deceptively simple wedding gown and elaborate veil said Sunday that she received the special commission in early January and managed to keep it secret not only from the inquisitive British press, but from her family.

“It was an extraordinary moment when she told me,” said Clare Waight Keller, a Briton who made history as the first female artistic director at French fashion house Givenchy. “Of course, it’s an incredible thing to be part of such a historic moment.” 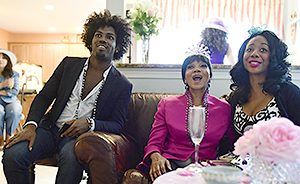 FROM LEFT, DAVID ALEXANDER JENKINS, PAULA JACKSON AND Cherri Gregg, community affairs reporter for KYW Newsradio 1060, all of Philadelphia, react during a television viewing party of the royal wedding of Meghan Markle and Prince Harry, Saturday, May 18, 2018, at the Armstrong-Turner residence in Burlington, N.J. The ceremony married the pomp and circumstance of Britain’s most sacred institution with elements of black culture, drawing viewers not normally drawn to the spectacle of the monarchy. (AP Photo/Corey Perrine)

She said the design process had been collaborative.

“I think she loved the fact that I was a British designer and working in a house such as Givenchy, which has its roots in a very classical, beautiful style,” Waight Keller said.

Hair stylist Serge Norman, who came from New York to do Markle’s hair, said she was relaxed in the hours before the ceremony.

“She was calm, yeah,” he said. “Chatty, absolutely. We were definitely having exchanges, yeah for sure. She was very happy. It was a beautiful morning, just the perfect morning to get married.”

Harry and Markle spent their first night as a married couple at Windsor Castle.

They are breaking with tradition by delaying a honeymoon. Before the wedding, Markle said she wanted to take up royal duties immediately.

They plan to fulfill their first royal work engagement as a married couple Tuesday, when they attend a garden party at Buckingham Palace to honor Prince Charles and his charity work. 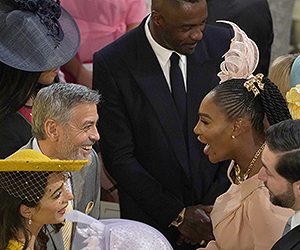 George Clooney, center left, greets Serena Williams in St. George’s Chapel at Windsor Castle for the wedding of Prince Harry and Meghan Markle in Windsor, England on Saturday, May 19, 2018. In the foreground are Amal Clooney, left, and Alexis Ohanian. At background center is Idris Elba. (Owen Humphreys/PA via AP)

Palace officials have been vague about Harry and Markle’s honeymoon plans, but they are expected to take a honeymoon in the near future.

No destination has been announced, and the couple may choose a place where they can relax without being trailed by photographers. Harry took Markle on a camping trip in Botswana shortly after they met and started dating.

No politicians including May, Obamas on guest list for royal wedding