Bringing ‘The Hate U Give’ to the big screen 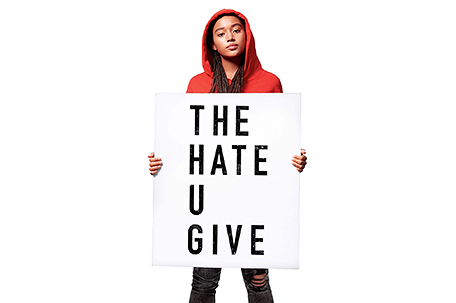 In the early months of 2016, publishing houses found themselves in a bidding war for the unpublished manuscript of the first-time author, Angie Thomas. Entitled “The Hate U Give”, the story focused on Starr Carter, sole witness to the death of her childhood friend at the hands of a police officer. The coming of age story featuring an African American teenager who lives in the working-class community of Garden Heights, but who travels 45 minutes to attend a private prep school in the prosperous community of Williamson, also sparked interest in the offices of Hollywood production companies on the lookout for new material.

George Tillman Jr. was one of the fortunate early beneficiaries of the manuscript. The producer and director, well known for his family and community centered portrayals of African- American life in such films as “Soul Food” and the “Barbershop” franchise, knew he was on to something.

Tillman had an immediate connection to the story. 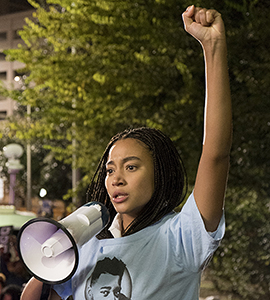 Amandla Stenberg stars in The Hate U Give. (Photo Credit: Erika Doss.)

“I read the first chapter and was pulled in right away,” he said. “I felt that the themes around the African-American family dynamic, self-identity and being Black were particularly strong and not something explored a lot in film. This is especially true when it explores the idea of ‘Am I Black enough?’ I thought it was an opportunity to explore a fresh take on these issues from a young person’s perspective. I wanted to be one to bring this story to life, and felt that my entire career was leading to this point where I can make this movie authentically.”

It was Tillman’s skill dealing with ensemble casts that made Thomas imagine doing the same.

“Soul Food” was one of the things that pushed me into writing. He has an ensemble cast in that movie and it made me think maybe I can write a lot of characters too,” Thomas.

The other inspiration for the book was closer to home, and all too real. The shooting death of Oscar Grant in Oakland, California on January 1, 2009 at the hands of a BART police officer made headlines all across the country. Although Grant’s death took place hundreds of miles away, it triggered conversations in Thomas’ dominantly Black neighborhood and her majority White private prep school.

“In my neighborhood, Oscar was one of us,” recalls the Mississippi-native. “At my school, maybe he deserved it because he was an ex-con.”

Her anger and frustration resulted in the decision that would change her life. “I decided to write a story about a boy named Khalil and a girl named Starr, who have to deal with a situation much like Oscar’s.”

Thomas’ short story became “The Hate U Give,” and connects the fictional world of the movie to the long line of high-profile police shootings of young Black people that have sparked protests and gained national attention across the US in recent years.

Tillman and his State Street producing partner Robert Teitel weren’t the only ones who wanted to option the story. Producers Wyck Godfrey and Marty Bowen from Temple Hill were also chasing the work. Tillman snagged the first call with Thomas, and clinched the deal with his questions. He asked, “Is it about this individual who is searching for identity, who finds her voice and finds out who she becomes, against a background of police brutality and racism? Is this what you intended?” For Thomas, it was clear that they shared a similar viewpoint.

“I wanted to make a film that feels modern for a young audience, but, also for a universal audience that creates a dialogue about important issues about race, social justice, and identity in order to move towards peace and change,” Tillman said. 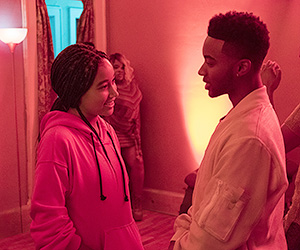 Amandla Stenberg and Algee Smith in The Hate U Give. (Photo Credit: Erika Doss.)

Godfrey and Bowen’s enviable record of successfully translating books like the TWILIGHT series for the screen was not overlooked. “Temple Hill and State Street were both so dedicated to the project and excited about the book and the possibility of making a movie,” said Thomas. “Their vision was phenomenal. It wasn’t too long after I got my publishing deal that we decided to let them option it.”

State Street and Temple Hill approached Fox 2000 to set up the project and were given a green light. Actor Amandla Stenberg had also gotten hold of the manuscript. A voracious reader, Stenberg was caught by “the way that this Black girl is characterized, there’s so much heart and depth and nuance.” She started her campaign to be involved immediately after finishing the book.

“I called my agent and said ‘we gotta do this,’and he called Fox,” Stenberg said.

The studio recognized the potential immediately and soon it became a package deal with Stenberg as Starr, Tillman as director, State Street Pictures and Temple Hill producing, and Audrey Wells to write the screenplay.

Thomas was ecstatic at the news of Stenberg being attached to the project.

“It felt right because I was thinking of Amandla as I created Starr,” he said. “Her activism and the way she uses her art form and her platform to speak up, and speak out for the oppressed was a definite inspiration. We couldn’t have had anyone better as Starr.”