‘Bridgerton,’ Series One: A Review 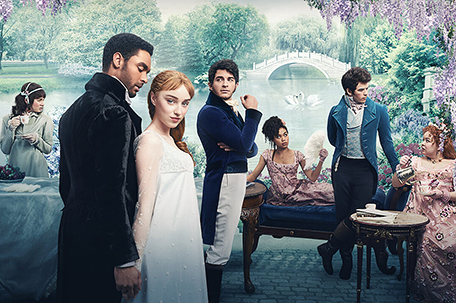 Shonda Rhimes is without a doubt an incredible writer and producer. She has been creating a niche for herself since the mid 90s. Rhimes is a true storyteller, known for creating material that keeps fans on the edge of their seats. “Scandal,” “Grey’s Anatomy” and “How To Get With Murder” are among her most popular works.

Fans of Rhimes work will not be disappointed with her newest project, “Bridgerton,” which found its home at Netflix as part of her groundbreaking, nine-figure, overall deal.

“Bridgerton,” similar to Rhimes body of work, has been the talk of the town, and has been trending on Netflix since its debut on Christmas Day. Based on the eight-novel series by Julia Quinn, “Bridgerton” tells the story of the eight children of the late Viscount Bridgerton which include, Anthony, Benedict, Colin, Daphne, Eloise, Francesca, Gregory and Hyacinth.

The period piece, set in England during the early 1800s, in its first season focuses a great deal of its attention to Daphne and the events that took place during her debut courting season.

Rhimes reunited with the iconic Julie Andrews after her work on “The Princess Diaries 2: Royal Engagement” in the series,, where Andrews serves as the narrator and voice of Lady Whistledown, the writer of an anonymous gossip column. The column sets the tone for the series, where there is a plethora of scandals, rumors, betrayal, sabotage, unrequited love, longing, passion and impropriety.

Daphne (Phoebe Dynevor) in her first courting season hopes to find love in the process of finding a husband — a concept less important to most than social standing and marrying into the right family. Her eldest brother Anthony (Jonathan Bailey), who is the head of the Bridgerton family, is responsible for his sister’s well-being. He promises his sister’s hand to the highest bidder, so to speak, an old man that she views as a terrible match, so she refuses. Insert the ridiculously handsome, slightly arrogant Simon, Duke of Hastings, played by Regé-Jean Page.

He is all the things that a woman could want — attractive, charming and intense. Like many things that appear too good to be true, he comes with his own set of caveats, the biggest being that he plans to never marry. After a chance meeting between Daphne and the duke, who also happened to be Anthony’s best friend, the pair devise a plan to get the town talking by pretending to be an item.

The result that they are hoping for is to attract more viable suitors for Daphne, while simultaneously keeping the families looking to pair Simon with their daughters at bay. Lady Danbury (Adjoa Andoh), a perfect combination of candor and kindness, who stepped in to help raise Simon after the death of his birth mother, also hopes he will resign from his bachelor lifestyle and settle down.

Sparks fly between Daphne and Simon immediately. Their undeniable attraction can be seen most often through their playful banter and flirtation. Whispers begin as their plan is off to a perfect start.

However, like all solid plans, there are a few problems.  The first is that Anthony is aware of his friend the Duke’s reputation as a rake and does not approve of the union. Additionally, their plan works so well that Daphne attracts the attention of Prince Friederich (Freddie Stroma) to the delight of Queen Charlotte (Golda Rosheuvel). This would be the ideal union for any woman, but Daphne has fallen hard for Simon and is conflicted between the proper choice and her heart.

Chaos ensues when Simon and Daphne are caught kissing in the garden during one of the parties — an offense worthy of ruining Daphne and the Bridgerton reputation. After Anthony challenges Simon to a duel, where only one will survive, Daphne comes up the only viable solution — to marry Simon. In addition to Simon’s vow to never marry, he informs Daphne soon after the proposal he accepts, that he is unable to have children.

Daphne agrees to give up her dreams of motherhood to salvage her and her family’s reputation. We find out later the details surrounding Simon not having children is the result of a vow he made to his evil father on his death bed to never sire an heir.

In addition to the story line surrounding the Bridgertons, which also includes a steamy affair between Anthony an opera singer deemed below their social standings, there is also a great deal of drama unfolding in another prominent family… the Featheringtons.

The Featherington’s drama includes a family flat broke because of Lord Featherington’s (Ben Miller) gambling problem; Lady Portia Featherington’s (Polly Walker) desire to keep that fact a secret while simultaneously moving up in society; a pregnant distant cousin Marina Thompson (Ruby Baker) eager to find someone to quickly marry her before her secret and shame is revealed, and the unrequited love that Penelope Featherington (Nicola Coughlan) has for Colin Bridgerton (Luke Newton) which drives her to take desperate measures. This first session gives viewers the perfect amount of tension, anguish, heartbreak and offers quite a few surprises.

With everyone at home, people are looking for content to delve into, but this is not a show for family viewing. The intense content and steamy love scenes are without a doubt for adult eyes only. But if you are looking for a salacious romance period piece — this is it!

A great deal of the plot is fueled by the fear of shame. Shame is at the root of maintaining a standard of propriety that is rigged with impossible expectations for the women of this time. They were consumed with marriage, positioning and propriety, at the sacrifice many times of their own happiness. Their worth in its entirety is tied to their husbands or husbands to be, which in turn requires the sacrifice of having full autonomy over their life choices.

Gender roles aside, the most endearing aspect of the show, other than the brilliant casting, is that social standing and class mattered, and race was inconsequential.

Rhimes did something that her work is known for doing, showcasing a diverse cast and in that cast there is a Black queen, a Black duke, and a number of people of color with high positions in society. It’s rewarding to see Black actors in a period piece, in spite of the fact that this notion came as a surprise to some viewers, because Black people have existed as royalty all over the world since the beginning of time.

This series is an absolute must see, and hopefully we won’t have to wait for an extended period of time for Shondaland to gift us season 2. Season 1 of “Bridgerton” is currently streaming on Netflix and it’s binge-worthy!