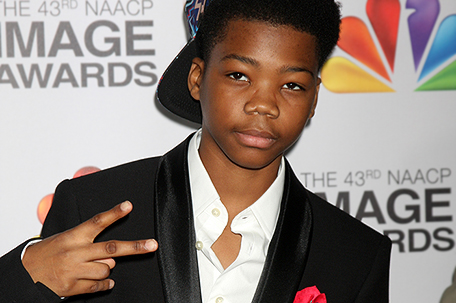 ABOVE PHOTO: Brian Bradley, AKA Astro arrives at the 43rd NAACP Image Awards at the Shrine Auditorium on February 17, 2012 in Los Angeles, CA.  (Photo by Helga Esteb-Shutterstock)

Brian “Astro” Bradley was born on August 26, 1996 in Brownsville, Brooklyn where he started rapping as at an early age. At 14, he successfully auditioned for Season 1 of the reality-TV series “The X-Factor” by performing a song he wrote called, “Stop Looking at My Moms.”

Astro finished 7th overall in the competition whose judges included Simon Cowell and Paula Abdul, and was subsequently signed to a contract by Epic Records. Here, he talks about making his acting debut as the narrator and co-star of Earth to Echo, a sci-fi adventure very similar to E.T.

Kam Williams: Hi Astro, thanks for the interview.

KW: I’m great, thanks. You know, I’m originally from Brooklyn, too

A: I know where that is. I bike over there every day.

KW: Do you still live in Brownsville?

A: No, I live in Bed-Stuy, near Marcus Garvey [Elementary School].

KW: Cool! What interested you in making the jump from music to movies?

A: I haven’t abandoned music. I’m still doing the music thing. I was 15 when I read the script for Earth to Echo. I thought it was amazing, and I couldn’t think of turning it down. It’s awesome for a kid from Brooklyn to have an opportunity to be on the big screen. And I had a great experience learning what the movie business is like. So, I’m glad I did it.

KW: I loved Earth to Echo. It reminded me a lot of E.T. except with cell phones, texting slang and state-of-the-art gadgets like eyeglasses with video cameras.

A: I think that was producer Andrew Panay‘s mission, to bring that nostalgic film back, but to update it with a 2014 spin.

KW: Larry Greenberg asks: Did director Dave Green give you any advice about how to act in front of the green screen opposite special effects that would be added later?

A: He gave all of us advice about ways we could portray our characters better. But as far as the special effects, I got more help from the visual effects team. It was definitely weird to act opposite emptiness, and later see the space filled on the screen by this little alien.

KW: Lisa Loving says: Wow! I just love that music video of “Stop Looking at My Moms.” She asks: How does your mom feel about the song?

A: I don’t want to seem like a jerk, but that song is so old. It’s from over five years ago now.

KW: So, what’s going on with you musically, then? I know you have a new EP called “Computer Era” coming out.

A: Yeah, I’m going to put the EP out soon, though I’m not rushing it. I’m taking my time since I don’t have a due date. I’m going to drop the first video from it really soon, but I’m not going to say when.

KW: At what age did you start rapping?

KW: Who would you say are primary musical influences?

A: Yeah, but I really prefer comedies. And I recently started watching some kung fu movies like The 36 Chamber of Shaolin which I enjoyed because of the symbolism and what it teaches you. As far as science-fiction goes, I’d watched a few films, but now that we completed  Earth to Echo., and I see how amazing it is, I plan to watch a lot more sci-fi.

KW: Have you seen any Bruce Lee karate films?

A: Of course! Everybody watches Bruce Lee. That’s a legend. He’s the man!

KW: What would you says is the main message of Earth to Echo?

A: I think it represents friendship! Echo might be an alien, but it symbolizes something that brings you and your friends together. Echo just happens to be an alien, and it took all of us united to save him. We weren’t the coolest kids in the neighborhood, but when we came together on his behalf, we felt like giants who had conquered the world.

KW: Irene has a follow-up: They didn’t focus on the fact that your character, Tuck, is black in the movie. So race wasn’t an issue. Did you enjoy that?

A: Yeah, I never even thought about that. And I don’t think anybody else on the set ever focused on it either. It’s 2014, man!

A: RZA’s book, the Tao of Wu. That’s a really good one. I’m very into reading lately, especially books that are beneficial, spiritually.

A: I don’t want to sound corny, but the last song I listened to really was “88,” one of the songs on my upcoming EP.

A: It’s hard to say. I don’t really cook much anymore.

KW: What’s your favorite dish to eat, then?

A: My whole family’s Jamaican, except for me. I like any type of West Indian food.

A: A young black male who’s going to take over the world.

A: To be happy. I don’t have a desire for material things. As long as I’m happy, I’m good, man.

A: About a half-hour ago, watching this debate about Hip-Hop between Lupe Fiasco and Peter Rosenberg on Hot 97. It was hilarious!

A: Spike Lee, Jay-Z and Biggie [Smalls], which would be weird, since he’s dead.

A: A chimp or a gorilla. I think a chimp’s the closest thing to a human.

KW: Yes, there’s just one chromosome difference between humans and chimps. The Anthony Anderson question: If you could have a superpower, which one would you choose?

A: The ability to read minds.

KW: That’s interesting. Most people say they’d like to be able to fly.

A: With the rate at which that technology’s developing, humans will be able to fly soon, anyway. Give it like 10 years.

A: My earliest childhood memory? I remember seeing a demon when I was real young. I forget what age, but I was certainly under 5.

A: Not much. I’m pretty much the same person. I’m just quieter at home listening to my music. Red carpets aren’t really my scene, so I try to get off the carpet as soon as possible. It’s cool doing it for Earth to Echo, but it’s weird doing the red carpet for other events when people don’t know me, and I have to stand there while the fans are all screaming for someone behind me.

A: No, I think the classics should be left alone. But if I had to remake one, I’d pick Space Jam. I heard they’re trying to remake Juice, but I feel you need to leave certain movies alone. I hope they don’t mess with The Last Dragon, because that’s such a great movie. I don’t mind sequels, but I don’t like seeing a classic remade. It’s really unnecessary.

A: Don’t follow in my footsteps. Create your own path. And master your own craft, whatever it is, writer, actor, singer, rapper… Make sure you spend time perfecting being you, and eventually you’ll succeed.

KW: Is there any question I haven’t asked you, that you wish someone would?

KW: Well then, how was your day?

KW: Well, I’m glad you’re having a good day and a great career, Astro, and best of luck with Earth to Echo.

A: Thank you very much, Kam. This has been an amazing interview.

To see a trailer for Earth to Echo, visit: https://www.youtube.com/watch?v=JMlcdEtAiBA

To see a video of Astro performing “Stop Looking at My Moms,” visit:  https://www.youtube.com/watch?v=glTozYOOqX0

Jada Pinkett Smith: The many shades of Jada, from TV nurse to “Karate Kid’s” mom