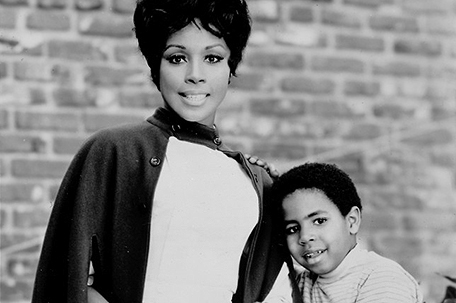 ABOVE PHOTO:  Diahann Carroll and Marc Copage in ‘Julia.’

In the upcoming 4th season of the Emmy-nominated series, Pioneers Of Television, PBS will explore trailblazing moments of TV history, starting on Tuesday, April 15, 2014, featuring a lineup that includes an episode titled Breaking Barriers, which airs on Tuesday, May 6, 2014, at 8pm ET, and which will trace the history of people of color on American television, featuring the mid-1960s breakthroughs of African Americans Diahann Carroll (Julia) and Bill Cosby (I Spy), as well as Latino landmarks, ranging from I Love Lucy with Desi Arnaz, to Miami Vice with Edward James Olmos. Also featured are Asian Americans such as George Takei (Star Trek), who details the childhood years he spent in a Japanese-American internment camp.

“We are thrilled to bring another season of ‘Pioneers Of Television’ to PBS,” said executive producer Steve Boettcher, who, along with producing partner Mike Trinklein, has helmed numerous specials and series on television’s breakthrough performers. “From stars that had Americans howling with laughter in front of their television screens, to the ones who broke barriers — and maybe even some who saved lives — this season’s line-up features legends who paved the way for contemporary television.”

“The fourth season of ‘Pioneers Of Television’ continues the series’ winning formula of bringing television’s most well-known stars and their lesser-known stories to PBS,” says Donald Thoms, PBS Vice President of General Audience Programming. “The show does a masterful job of serving us the history of the medium while telling us the backstage tales of America’s favorite shows.”

Check out the full lineup of 4 hour-long episodes for the upcoming season of Pioneers Of Television below:

This star-packed premiere episode features fresh interviews with Jerry Seinfeld, Roseanne Barr, Tim Allen, Ray Romano and Bob Newhart. The program reveals how America’s top standup comics made the transition from the comedy stage to the sitcom form. It includes dozens of clips from “Seinfeld,” “Home Improvement,” “Everybody Loves Raymond,” “Roseanne” and more.

From George Clooney on “ER” to Richard Chamberlain on “Dr. Kildare,” television’s long love affair with doctors and nurses shows no signs of letting up. Noah Wyle, Anthony Edwards, Gloria Reuben and Eriq LaSalle open up about the secrets of “ER”; Howie Mandel, Ed Begley, Jr. and Christina Pickles revisit “St. Elsewhere.” The episode features the final interview with Chad Everett of “Medical Center” before his death in 2012.

This episode peeks behind the curtain to reveal the techniques of America’s favorite comedic actors. The program features the manic improvisational style of Robin Williamsand his comic predecessor, Jonathan Winters. Their style is a fascinating contrast to Tina Fey, who explains her measured, highly prepared approach. The episode also highlights the all-time #1 Emmy Award winner for comedy acting: Cloris Leachman.

This episode traces the story of people of color on American television — including the mid-1960s breakthroughs of African Americans Diahann Carroll (“Julia”) and Bill Cosby(“I Spy”). Latino landmarks range from “I Love Lucy” with Desi Arnaz to “Miami Vice” with Edward James Olmos. Also featured are Asian Americans such as George Takei (“Star Trek”), who details the childhood years he spent in a Japanese-American internment camp.