BPRW History Announces “Rise Up: The Movement that Changed America” 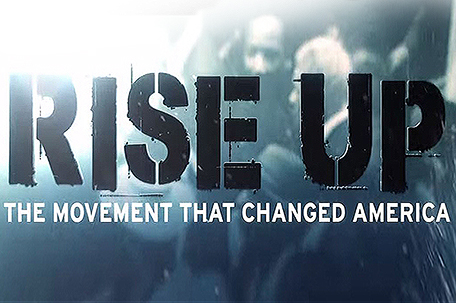 New York, NY –– When Martin Luther King Jr. was murdered in Memphis on April 4, 1968, he left a legacy of profound change, yet there was still much unfinished work.

History presents “Rise Up: The Movement that Changed America,” a one-hour documentary executive produced by LeBron James and Maverick Carter for SpringHill Entertainment and Emmy-Award winning filmmaker Stanley Nelson (“The Black Panthers: Vanguard of the Revolution,” “Freedom Riders”), exploring the key battles in the Civil Rights Movement that transformed American society – from the Montgomery Bus Boycott of 1955 to the Chicago Campaign which led to the Fair Housing Act of 1968.

The special premiered Wednesday, April 4 on the 50th anniversary of Martin Luther King Jr.’s death, and uncovered what it took to translate protest into real legislative change.

“We started Springhill to tell the stories we wanted in our community. It is an honor to partner with Stanley Nelson, who has been such an important voice and artist, on this documentary,” James said. “There are more and more great productions – both fiction and nonfiction – telling our story. I am really proud of the role Springhill is playing in this moment and appreciate History giving us this opportunity.”

“We are currently witnessing a young generation rising up to make their voices heard, similar to the journey courageous leaders of the Civil Rights movement took to create change in America,” said Eli Lehrer, Executive Vice President of Programming, for History. “Through the powerful storytelling of LeBron and Stanley, this film will reflect on the past providing viewers with an intimate account of the campaigns that resulted in unprecedented legislation, and look toward the future as current activists and politicians continue the path toward change. I’m very excited to work on this film, as these visionary men and women literally changed the course of history,” said Nelson. “This film provides an intimate look at the strategy behind the boycotts, campaigns, and marches that came to define the movement.”

Martin Luther King, Jr., among others, developed a groundbreaking combination of grassroots organizing and legal action that led to the most rapid social change in American history. This documentary follows the inner workings of the movement and the four legislative decisions that resulted, including: Montgomery Campaign, which declared that segregated public transportation was in violation of the 14thAmendment; Birmingham Campaign, led to the Civil Rights Act of 1964 which ended segregation in public places and banned employment discrimination; Selma Campaign, led to the Voting Rights Act of 1965, which aimed to overcome legal barriers that prevented African Americans from exercising their right to vote; and the Chicago Campaign, which led to the Fair Housing Act of 1968, which prohibited discrimination over the sale, rental or financing of housing.

“Rise Up: The Movement that Changed America” tracks the details of the dedication, sacrifice and commitment to change – even in the face of withering violent resistance – told by the women and men who led the way. Interviewees include Civil Rights movement activists, politicians and historians, such as: President Bill Clinton; Jesse Jackson; Andrew Young; Sen. Cory Booker; Sen. Doug Jones; Harry Belafonte and Rashad Robinson, Color of Change Executive Director.