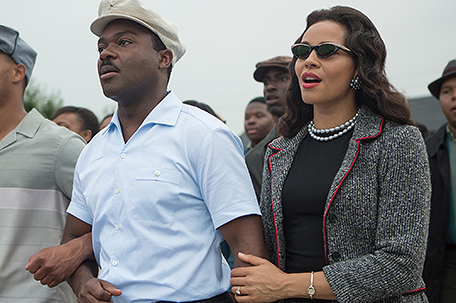 ABOVE PHOTO: David Oyelowo as Martin Luther King, Jr. and Carmen Ejogo as Coretta Scott King in a still from Selma.

NEW YORK — The American Film Institute on Monday named the coming-of-age tale “Boyhood,” the sci-fi epic “Interstellar” and the civil-rights drama “Selma” among its top movies of the year.

The AFI actually chose 11 movies for its annual top 10 list.

Films that may vie for a best picture nod that the AFI overlooked include the Stephen Hawking biopic “The Theory of Everything,” the Gillian Flynn adaptation “Gone Girl” and Wes Anderson’s “The Grand Budapest Hotel.”

In early awards, Richard Linklater’s “Boyhood,” filmed over 12 years, has emerged as the front runner. It was chosen as the year’s best film by the Los Angeles Film Critics Association and the New York Film Critics Circle. The race will take another turn Thursday when nominations are announced for the Golden Globes.

The AFI also named its top 10 television shows of the year: “The Americans,” “Fargo,” “Game of Thrones,” “How to Get Away With Murder,” “Jane the Virgin,” “The Knick,” “Mad Men,” “Orange Is the New Black,” “Silicon Valley” and “Transparent.”

The AFI Awards are chosen by a jury made up of the institute’s trustees, critics and scholars. They will be handed out at a Jan. 11 luncheon in Los Angeles.