Bounce’s season premiere of “In the Cut” with two all new episodes back to back, July 11 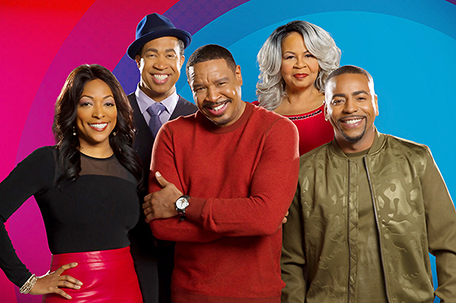 ABOVE PHOTO:  The cast from “In The Cut.”

ATLANTA – Bounce will double the laughs by kicking off season three of its hit sitcom “In The Cut” starring Dorien Wilson and Kellita Smith with two new original episodes back-to-back 9:00-10:00 PM. (ET) on Tues. July 11. All-new “In The Cut” episodes will continue to premiere Tuesday nights at 9:00 PM (ET) through the summer.

Bounce has also announced that Ed Gordon will host a star-packed special featuring interviews with the biggest African-American celebrities in movies, television and comedy today, including Queen Latifah, Jada Pinkett Smith, Michael Strahan, Omari Hardwick and Cedric the Entertainer, which will world premiere on Mon., July 17 at 10:00 PM. (ET).

Coming off its highly-rated second season, “In The Cut” stars Wilson (“The Parkers,” “Dream On”) as Jay Weaver, an accomplished entrepreneur and barbershop owner who is kept on his toes by Cheryl, played by Smith (“The Bernie Mac Show,” “The First Family”), the co-owner of the beauty salon next store and his love interest. Ken Lawson (“The Parkers”) returns as Jay’s 32-year old illegitimate son from a short-lived fling now in on the family business as does John Marshall Jones (“The Smart Guy”) as fellow barber and pal Smitty.

In the celebrity-driven Ed Gordon special, the award-winning journalist interviews the stars of the upcoming summer comedy “Girls Trip,” Queen Latifah, Jada Pinkett Smith, Regina Hall and Tiffany Haddish, who discuss their careers and reflect on the contributions of Black women in Hollywood today. Gordon profiles Super Bowl champion-turned broadcaster Michael Strahan and the very busy television talent discusses his life, his controversial departure from “Live with Kelly and Michael” and more.

“Power’s” Omari Hardwick talks with Gordon about his hit series, the relationship with his wife and how he has handled fame in the social media era. Gordon also sits with Cedric the Entertainer and D.L. Hughley who, among other things, discuss the state of comedy in the age of President Donald Trump and the pros and cons of utilizing material based on the activities of the current administration.